Archaeology on the Waterfront

As redevelopment takes place along Alexandria's waterfront, archaeologists are exploring the properties undergoing development. Excavations took place in 2015-2016 at the Hotel Indigo Site at 220 S. Union Street and in 2017-2018 at Robinson Terminal South, at 2 Duke Street.

At the Hotel Indigo Site, Archaeologists uncovered the remains of the hull of a fifty-foot vessel, as well as John Carlyle's 1755 public warehouse. Excavation took place in 2015-2016, and remains of this ship and warehouse are now undergoing conservation.

At Robinson Terminal South archaeologists have located the remains of three 18th century ships, as well as foundations of Hooe's 18th century warehouse and store and the 19th century Pioneer Mill.

Archaeological excavation on these two blocks was conducted by archaeologists from Thunderbird Archaeology, a division of Wetland Studies and Solutions, Inc., working in coordination with the Alexandria city archaeologists. As required by the Alexandria Archaeological Protection Code, Thunderbird’s work is funded by the developers; Carr City Centers for the Hotel Indigo Site and EYA, LLC for Robinson Terminal South. Conservation is funded by the City of Alexandria, grants, and generous contributions to the Save our Ships Conservation Fund.

Passed by City Council in 1989, the Archaeological Protection Code requires developers to hire archaeological consultants to conduct investigations prior to construction on land with the potential to contain buried sites of historical significance. This will provide an opportunity for archaeologists to explore the 18th and 19th–century history of the City as development along the waterfront continues.

Researchers from the Conservation Research Laboratory at Texas A&M are working with Alexandria Archaeology staff and an amazing team of volunteers to document the three ships that were found at the Robinson Terminal Site in 2017-2018. All three ships are being laser scanned and reconstructed using computer models and 3D printing. This phase of the project, which began in September 2019, will continue through 2021.

The Historic Ship Stabilization: Ship Ponding  project includes the stabilization and storage of these three historic ship remnants excavated at the Robinson Landing Site. The overall goal of the project is to transport and store the timbers in Ben Brenman Pond (4800 Brenman Park Dr.) in a manner that preserves the possibility of future study and conservation when adequate funding and/or a location for permanent storage or display is available. Planning for the longer-term storage of the historic ship timbers began shortly after the ships were discovered in 2018.

The Conservation Research Laboratory also continues conservation of the first ship, discovered at the Hotel Indigo Site in 2015, and the wooden timbers from John Carlyle's 1755 public warehouse are being conserved at the Maryland Archaeological Conservation Laboratory. This is a multi-year project. 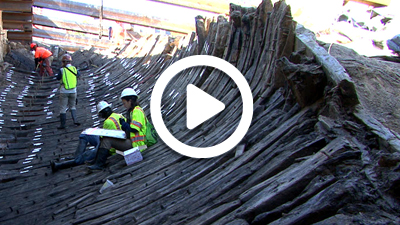 Save Our Ships Fund

Alexandria’s rich maritime heritage needs your help! In addition to four historic ships, archaeologists unearthed the remains of a bustling waterfront neighborhood. We need your help to preserve, conserve, and interpret these amazing artifacts for future generations.