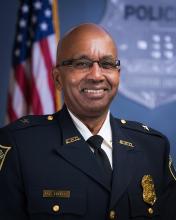 City Manager Jim Parajon has announced the appointment of Acting Chief Don Hayes as Chief of Police for the City of Alexandria, effective today, April 18. Hayes has been serving as Acting Chief since June of 2021 and succeeds Chief Michael L. Brown, who retired in 2021.

“Chief Hayes’ 40 years as a leader and public servant with the Alexandria Police Department, as well as his deep commitment to our community, makes him the right choice to serve Alexandria as Chief of Police,” said Parajon. “His experience and connections throughout our city will be invaluable in our work to protect and serve all, and enhance the relationship between our police department and the community. In addition, the trust and confidence he has within the Alexandria Police Department will serve our officers and our community well as we continue the critical work of recruiting new police officers and retaining and supporting those who choose to serve in this vital capacity.”

Hayes joined the Alexandria Police Department in 1981, and achieved the rank of sergeant in 1996, overseeing the community-oriented policing and internal investigations sections. In 1999, Hayes was promoted to lieutenant and led the special operations, information services, and public services divisions. He was promoted to captain in 2013 and served as patrol commander, in addition to heading the parking enforcement, traffic, special events, and community relations divisions. He was promoted to assistant chief in 2019 and has since used his diverse experience to oversee all parts of the Police Department.

An Alexandria resident for nearly 30 years, Hayes is an active member of an array of organizations serving the community through youth empowerment, diversion, and offender’s aid programs.

Hayes holds a master’s degree in organizational leadership from Johns Hopkins University, a master’s degree in divinity from Liberty University Baptist Theological Seminary, and a bachelor’s degree in business administration from Bowie State University. He is a graduate of the FBI National Academy, has earned numerous certifications, and is an active member of the National Organization of Black Law Enforcement Executives; the International Association of Chiefs of Police; and the FBI National Academy Associates.

For inquiries from the news media only, contact Sarah Taylor, Assistant City Manager, at sarah.taylor@alexandriava.gov or 703.746.3963.

This news release is available at alexandriava.gov/go/3563.