Equity means promoting just and fair inclusion throughout our city, and creating the conditions in which everyone can participate, prosper, and reach their full potential. 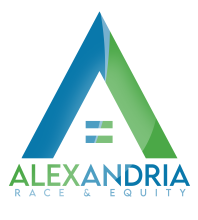 The City of Alexandria is committed to working toward a world where we are all embraced for who we are, and are able to thrive to reach our highest potential.

Removing barriers to full participation and belonging in life and culture. Equity means promoting just and fair inclusion throughout our city, and creating the conditions in which everyone can participate, prosper, and reach their full potential.

Under the direction of the City’s first Race and Social Equity Officer, Jaqueline Tucker, City departments and an interdepartmental workgroup are working to build a framework, in collaboration with City employees, community members, and other stakeholders, to ensure policy decisions advance race and social equity for all Alexandria residents.

ALL Alexandria means each and every resident thrives in our historic, vibrant and diverse city.

ALL Alexandria: The Background, Vision, & Goal

The appearance of Northern Virginia as a haven of affluence and upward mobility is shattered when examining census data, which reveals disparities in education, health, housing, economic resources, and more. A 2017 report from the Northern Virginia Health Foundation identified 15 “islands of disadvantage” across the region – clusters of adjacent census tracts where affluence and upward mobility rub shoulders with communities struggling with poverty and inequity. Two of these “islands of disadvantage” are located in the City of Alexandria.

But data is only part of the picture; it does not help us understand how and where the City can tackle inequity. Programmatic data, collected through the City, coupled with community engagement, and using proven and tested tools and best practices, can help Alexandria.

To understand these disparities, as City government and as a community we need to take an honest look at history, and the systemic and institutional nature of disproportionality across all indicators of life and well-being. This is not just a Northern Virginia problem or a City of Alexandria problem: it is a national and global concern, deeply rooted in racism and anti-blackness.

We must thoroughly understand that people are not the problem, it is the systems and institutions (including government), and the policies and practices that they have created, perpetuated and maintained that lead to these outcomes.

Alexandria is a caring, kind, compassionate, fair, just, and equitable city that is an affordable, livable community for ALL.

Reduce and eliminate disparities and inequities experienced by ALL Alexandria residents, especially residents of color and those that have been historically and systemically marginalized.

The Government Alliance on Race and Equity (GARE) normalize, organize, operationalize, national best practice is being used by more than 200 local, regional, and state government jurisdictions across the country to achieve racial equity and advance opportunities for all. This Theory of Action will help to drive the City’s efforts to develop a framework for action to achieve racial and social equity.

Provide your input for the development of the City's Racial Equity Tool by participating in a focus group or completing a survey.
Learn more

The 30-Day Racial Equity Challenge is an educational tool used to advance understanding of the intersections of race, power, privilege, and oppression
Participate in the Challenge

The Race and Social Equity Office has provided annotations for the ALL Alexandria resolution for additional explanation and educational purposes.
ALL Alexandria Resolution

The goal is not to just eliminate the gap between white people and people of color, but to increase the success for all groups. Racial equity develops goals and outcomes that will result in improvements for all groups, but the strategies are targeted based on the needs of a particular group. Systems that are failing communities of color, are actually failing all of us. Targeted universalism will increase our collective success and be cost effective – Government Alliance on Race and Equity

The City’s racial and social equity initiative grew from the efforts of an interdepartmental Race and Social Equity Working Group, formed in 2018. These City employees developed and piloted social and racial equity programming in four City departments. The programming was based on the work of the Government Alliance on Race and Equity (GARE), a national network of governments working to achieve racial equity and advance opportunities for all. The City  became a member of GARE in 2019, developing its inaugural Racial Equity Learning as part of the Metropolitan Washington Council of Governments’ year-long  Advancing Racial Equity Cohort.

As a member of GARE, Alexandria joins governmental jurisdictions across the country in

When this occurs, significant leverage and expansion opportunities emerge, setting the stage for the achievement of racial equity in our communities.