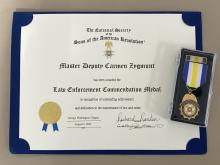 On August 3, the George Washington Chapter of the Sons of the American Revolution awarded Master Deputy Carmen Zygmunt the Law Enforcement Commendation Medal in recognition of her outstanding contributions to the Sheriff’s Office and to public safety.

Throughout her 25-year career, Deputy Zygmunt has served with excellence and her experience and extensive knowledge of both detention center and judicial operations make her a tremendous asset to the Sheriff’s Office. Further, her professionalism and genuine concern for others have allowed her to truly make a lasting impact.

Assigned to Judicial Services and a veteran courtroom bailiff, Deputy Zygmunt routinely earns praise from colleagues, judges, members of the bar, courthouse staff and visitors. She has an excellent rapport with court officials but also communicates effectively with others. Recently her supervisor received a message from family members of a defendant who was found guilty in a criminal trial. It had been an emotional day for the family and Deputy Zygmunt’s spoke with them and offered a comforting comment that was “so uplifting and really raised their hopes in one of the roughest times of their lives.”

Deputy Zygmunt is highly effective in her words but also in her observations and actions. From aiding an attorney having a medical emergency to training to civilian courthouse employees on emergency procedures to keeping a judge safe in her courtroom, Deputy Zygmunt is always helpful and quick to take appropriate action. Throughout her career, she has consistently gone above and beyond her basic assigned duties and volunteered to take on additional responsibilities. She previously served on the award-winning honor guard, and she is the lead courthouse deputy for fire safety, compliance with the Prison Rape Elimination Act, and the Office’s accreditation.

Deputy Zygmunt’s knowledge of accreditation standards and compliance is extremely impressive, and she ensures that Judicial Services remains in full compliance with the Commission for Accreditation of Law Enforcement Agencies (CALEA). This spring, the Office underwent reaccreditation with CALEA and in addition to her compliance documentation work, Deputy Zygmunt was the primary staff member to coordinate the assessors’ virtual visit at the courthouse, arranging for the assessors to speak remotely with the Chief Judge, Commonwealth’s Attorney, and other officials about court security, and creating a video to show assessors how certain functions and areas of responsibility are handled.

Following the awards presentation, Deputy Zygmunt thanked Mr. Rankin and Mr. Blair and Sheriff Casey expressed his appreciation for the Sons of the American Revolution’s continued support of law enforcement. 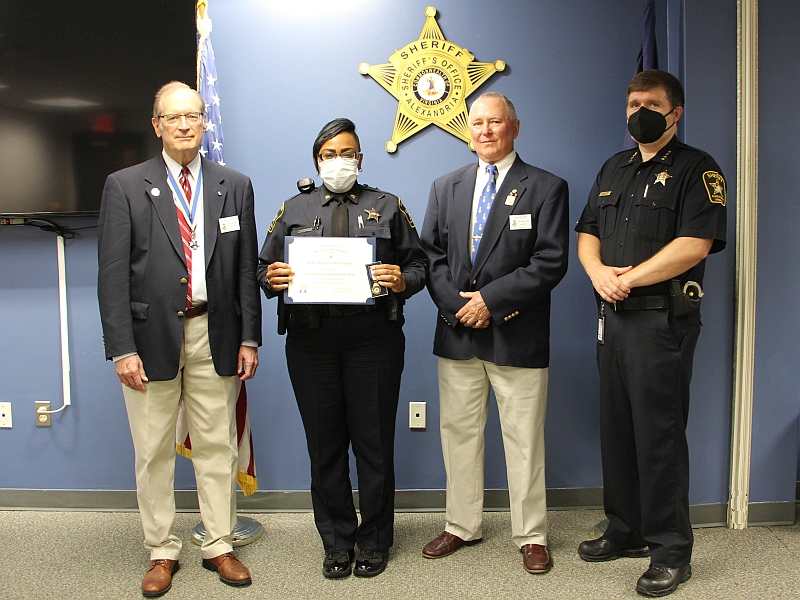