The City of Alexandria is working through procurement and pre construction activities to build the pedestrian safety and access improvements as well as traffic congestion improvements to the intersection of King Street, Callahan Drive, and Russell Road. Over the past 3 years, staff has been working to develop, analyze, and design options that mitigate traffic congestion.

Staff has been working with Dominion Power to move the street light poles on the north side of Callahan Drive near the intersection to make way for the upcoming construction of the approved intersection improvements. Staff has also been going through the procurement processes to get contractors on board to build the approved plan designs. Staff is currently finalizing the design plans and the updated versions will be posted below.

For more information about past meetings and information, please see the Public Engagement section of the webpage.

The City of Alexandria was awarded a grant from the Federal Transit Authority (FTA) to make pedestrian and bicycle safety improvements to improve access to transit.  The intersection of King Street, Callahan Drive and Russell Road was identified as a priority location for these improvements.  As part of the City's Complete Streets Program, the City kicked off this project at a public meeting on January 15, 2015.

The goals of this project are to : 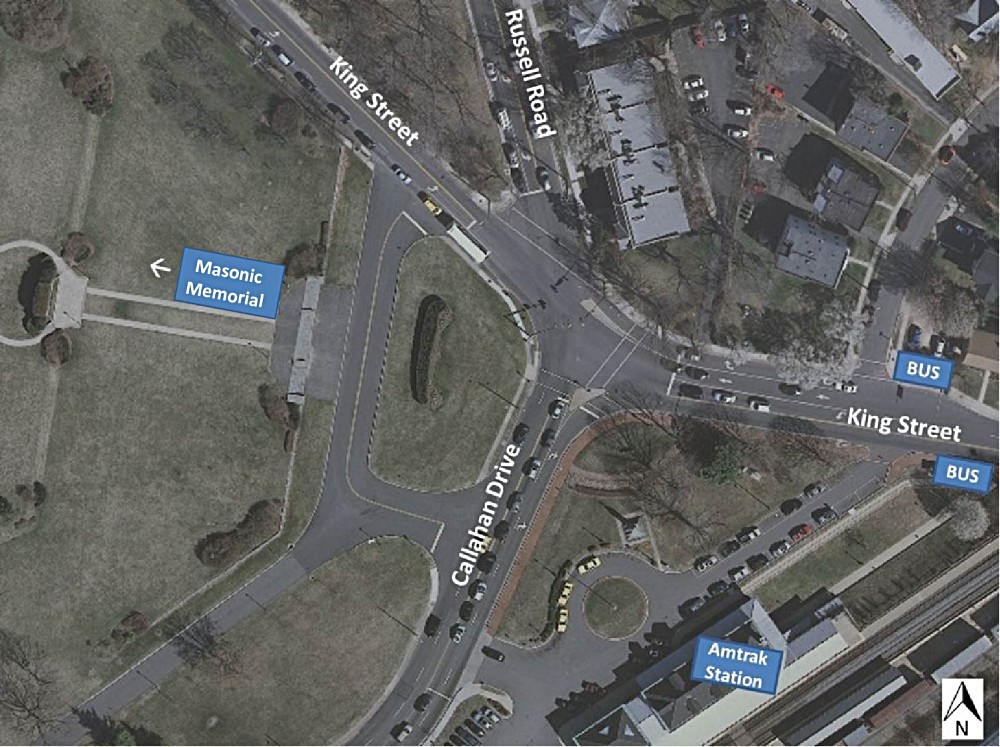 HOW WILL THIS PROJECT ADDRESS TRAFFIC BACKUPS?

While this project was not originally intended to address traffic backups, the design options have been shown to reduce congestion at this intersection. Changes that will reduce congestion make changes to northbound Callahan Drive and Russell Road so that these two approaches can move through the intersection at the same time safely. Options for the operation of the access road to the George Washington Masonic National Memorial have also shown to reduce delays at this intersection by potentially removing the ability to make left and right turns out of the access road onto King Street. The details of the time saving measures staff have developed will be posted in a narrated presentation in October 2020 using new data collected in January 2020.

DID YOU CONSIDER ALLOWING BOTH SOUTHBOUND LANES TO GO STRAIGHT THROUGH ON RUSSELL ROAD?

Yes, we considered this lane configuration, but found that it could not be implemented for safety reasons. Designers concluded that a truck could not continue through from the left lane without overlapping into the right lane through the intersection, creating a high risk of sideswipe crashes. However, we expect to achieve similar reductions in traffic backups on Russell Road by allowing traffic to move concurrently with northbound Callahan Drive.

WHAT ARE THE BENEFITS TO PEOPLE WALKING AND BICYCLING THROUGH THE INTERSECTION?

The improvements mentioned above are shown in the draft design plans below with one of the Design Options that improves traffic conditions.

WILL EXISTING KING STREET BIKE LANES BE EXTENDED TO CONNECT WITH NEW BIKE LANES PROVIDED THROUGH THIS INTERSECTION?

A left-turn lane from eastbound King Street to northbound Russell Road is needed at the intersection for overall traffic operations. The space required for a left-turn lane prevents us from extending the bike lanes eastward to directly connect to the intersection. However, after implementation of these intersection changes, we will evaluate changes in eastbound King Street traffic to see if the existing left turn lane can be shortened, in order to allow the bike lanes to be extended from their current start/end at W Rosemont Avenue, down to W Cedar Street.

IS THE CITY PROPOSING THE REMOVAL OF TRAVEL LANES FOR THE PROPOSED BICYCLE FACILITIES?

No. The bicycle accommodations discussed during 2015 and shown above in the draft concepts, can be accomplished within the existing right of way without reducing any travel lanes. The only changes to lane configurations in the design options are intended to benefit vehicle traffic congestion by separating turning traffic movements on Russell Road and Callahan Drive.

HOW IS THIS RELATED TO ALEXANDRIA’S VISION ZERO TRANSPORTATION SAFETY PROGRAM?

Alexandria’s Vision Zero Action Plan calls for eliminating all deaths and serious injuries by 2028. Using a data-driven approach to identifying opportunities to make the system safer, the Action Plan identified a number of corridors and intersections where future changes could help reduce crash risks. The intersection of King Street, Callahan Drive, and Russell Road was identified as a high-crash intersection, with a history of serious injury crashes for pedestrians, bicyclists, and automobile occupants.

WHY HAS THIS PROJECT TAKEN SO LONG?

There have been a few factors that have led to project delays. First, the City encountered delays creating design options for the lane configuration that was responsive to community concerns about traffic congestion. After conceptual designs were created, the City conducted a thorough analysis of traffic signal operations scenarios, to see how the community’s traffic concerns could be addressed alongside the pedestrian safety objectives of the project. The resulting analysis helped to validate the proposed design, and shows how it will improve safety and mobility for all modes. Further delays came from the  King Street-Old Town Metrorail Station Access Improvement Project and the Summer 2019 Metro Platform Improvement Project as well as other factors. Since late 2019, staff have been working to do our due diligence to use data collected in January 2020 and rerun the traffic modeling to accurately reflect typical traffic conditions.

Staff was working to reintroduce the project through an outreach process that was planned to occur in early 2020. In February, staff met with the community in a small meeting with the Rosemont Civic Association to discuss the project and other transportation issues in the neighborhood. With the global COVID-19 pandemic, community meetings were put on pause to address the public health crisis. Staff are now restarting the project to move forward starting in Fall 2020.

WHEN WILL THIS PROJECT BE BUILT?

HOW WILL THIS WORK WITH THE REPAVING OF COMMONWEALTH AVENUE?

Most of the construction work for the King, Callahan, and Russell Road project will occur behind the curb. While lane closures may be necessary at some points for the safety of the construction crews, these closures are temporary and expected to occur before traffic volumes resume to typical conditions. Repaving of the intersection will be done by the City’s paving crews later. The crew that repaves Commonwealth and Callahan is the same, so they will only do one paving project at a time. Both roads will not be under repaving construction at the same time.

WHAT COMMUNITY OUTREACH WAS CONDUCTED FOR THIS PROJECT?

Three community meetings were held to discuss design ideas and community concerns. Presentations and comment summaries from those meetings are posted at the bottom of this webpage. Staff have begun to reintroduce the project and talk with the community during 2020. Currently, staff is holding a virtual open house and comment period to gather feedback about neighborhood preferences for design options that seek to improve vehicular traffic conditions while building pedestrian and bicycle safety improvements that are funded by the project grant.

Staff has met with and continues to meet with community members and neighborhood leaders about the project and other traffic concerns related to this location. The following events have been held to discuss the project and gather feedback: