King Street Place is the pedestrianization of the 100 block of King Street from May to Septemberr.

On Saturday, November 12, the Alexandria City Council voted to make permanent the pedestrian-only zone. The unanimous vote allows the City and businesses to consider more substantial investments in this area to support outdoor dining, activation with through events and vendors, and safety. This officially ends the street closure as a pilot project.

The pedestrian zone pilot was extremely popular: of over 1,800 feedback form respondents, roughly 90% supported making the pilot permanent. In addition, several boards and commissions supported the pedestrian zone along the unit block of King St. and the Strand:

Moving forward, businesses and City staff will determine next steps for this area, including additional/upgraded amenities and programming. In the longer term, the Department of Project Implementation is developing the Waterfront Implementation Project to address flooding and improve the streetscape per the Waterfront Small Area Plan. This project is anticipated to begin construction in Spring 2025.

Thank you to the almost 2,000 respondents who provided feedback on the pedestrian-only zone. Some of the major takeaways are:

In late August, the City provided an online feedback form to gain insight on public opinion of the pedestrianization of the unit block of King Street and the northern portion of The Strand. To view all of the results, [click here] .

City Council has requested that staff include a pilot program for the pedestrianization of the 100 block of King Street in their FY 2020 work plan. This project was originally discussed with the community through an extensive community engagement process in 2015 during the Lower King Street Multi-modal Feasibility Study. 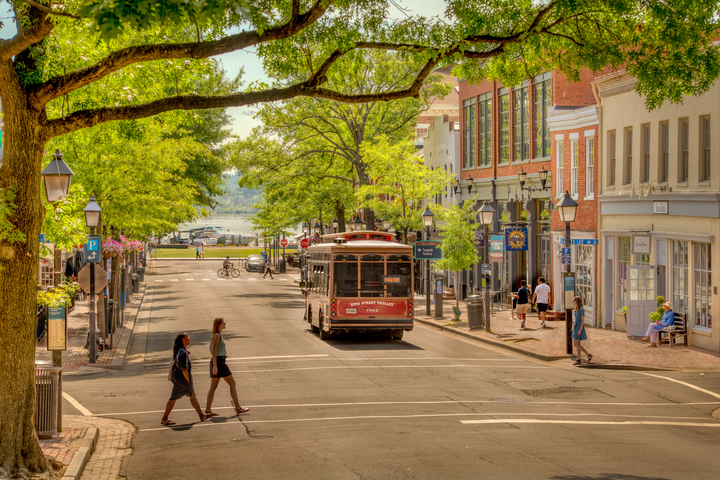 Staff provided an oral update to City Council on March 10 with the intent of getting feedback on the proposed plan. The concept development has gone through many iterations based on discussions with the resident and business communities, and a one-way traffic flow option with expanded outdoor dining on the south side of the block was proposed to Council. Due to social distancing orders related to COVID-19, full implementation of the Pilot Program is being placed on hold.  Staff will provide a proposal to City Council in the fall to implement this project in Spring 2021. In the meantime, City Council endorsed the City Manager's action for the pedestrianization of the 100 block of King Street as an interim measure to help with COVID-19 recovery efforts and in response to overcrowding near the waterfront.

The City, in partnership with Visit Alexandria, has been meeting with the impacted businesses to hear their concerns and get feedback on various design ideas. Staff is also working through the Waterfront and Transportation Commissions to get input on the project that will ultimately inform the proposed pilot program. Additionally, the project has been discussed at the Old Town Business and Civic Associations.