Visit the Alexandria Archaeology Museum to learn how the City’s archaeologists, volunteers and students work with residents and developers to study and manage archaeological resources important to the community's past.

The Alexandria Archaeology Museum is dedicated to preserving and studying Alexandria’s rich archaeological heritage and fostering within residents and visitors a connection between the past and present while inspiring a sense of stewardship and adventure.

Visit the museum and lab on the third floor of the Torpedo Factory Art Center, at 105 N. Union Street in historic Old Town Alexandria. 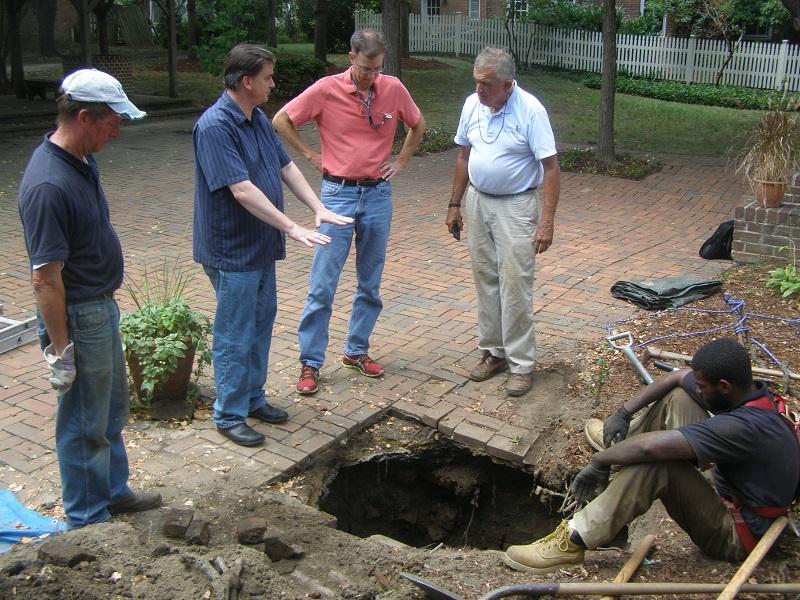 What can home and business owners can do when they encounter sinkholes or small circular depressions in their backyard? These backyard features may be the buried remains of historic wells or privies. As archaeologists, we want to protect and save them! 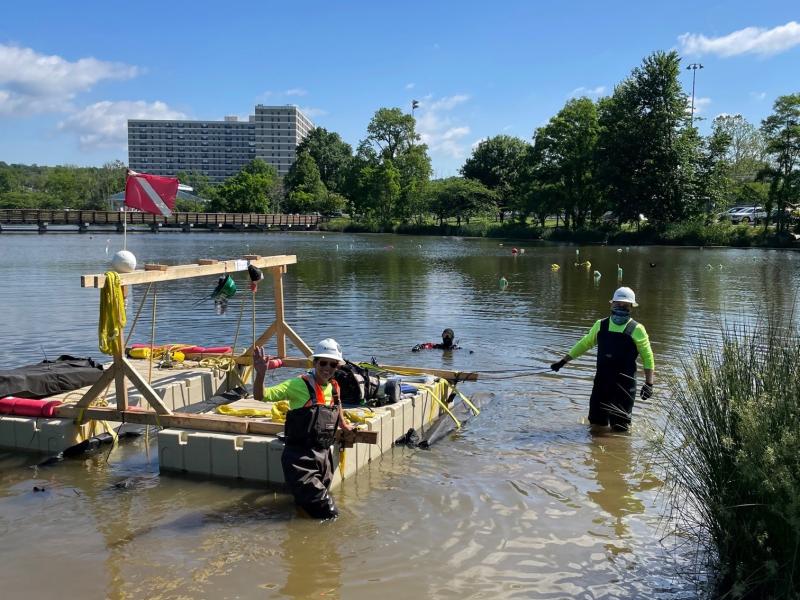 This project, completed in June 2022, includes the stabilization and storage of three historic ship remnants excavated at the Robinson Landing Site (archaeological site 44AX235). The overall goal of the project is to transport and store the timbers in Ben Brenman Pond in a manner that preserves the possibility of future study and conservation. 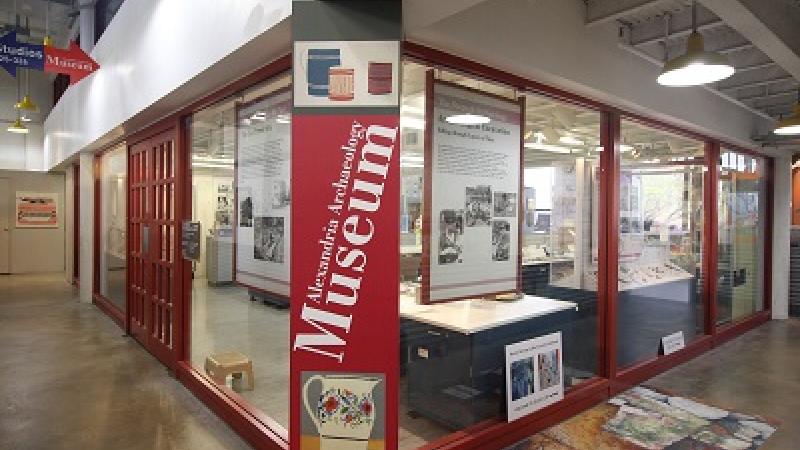 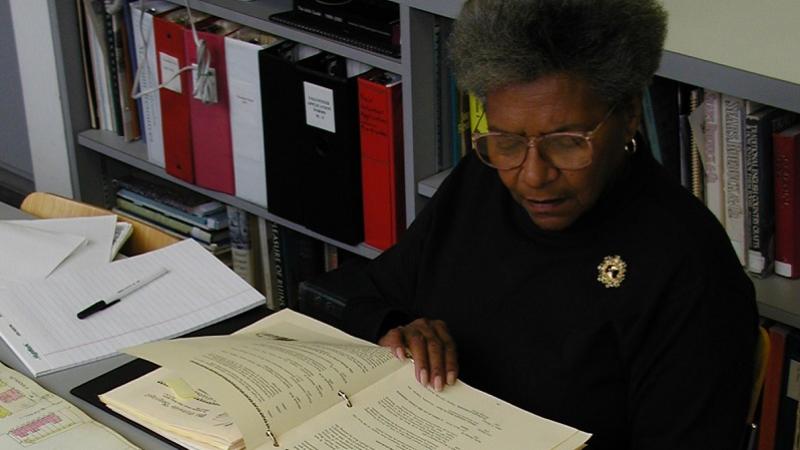 Archaeology is the scientific study of the human past, through excavation and related research. Alexandria Archaeology reviews development projects to determine their impact on archaeological resources and administers the Archaeology Protection Code included in the City’s Zoning Ordinance. 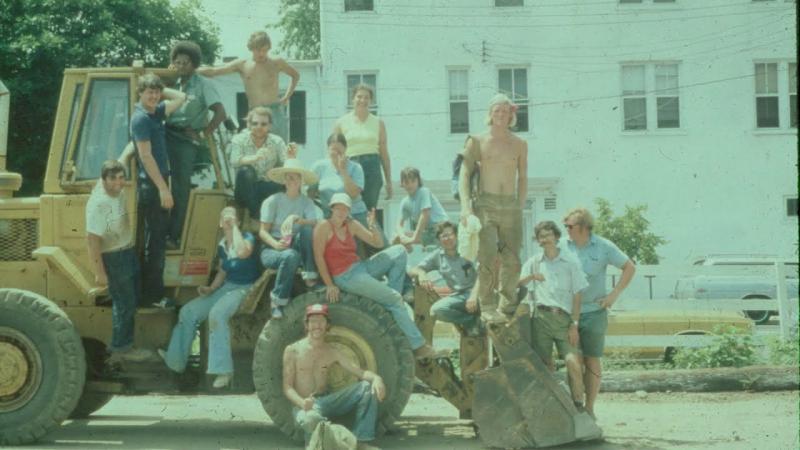 The History of Alexandria Archaeology

The City of Alexandria has funded archaeology in Alexandria since 1973. Learn about the long history of the archaeology program, from its beginnings at Fort Ward in 1961 to today.

Archaeology in the City 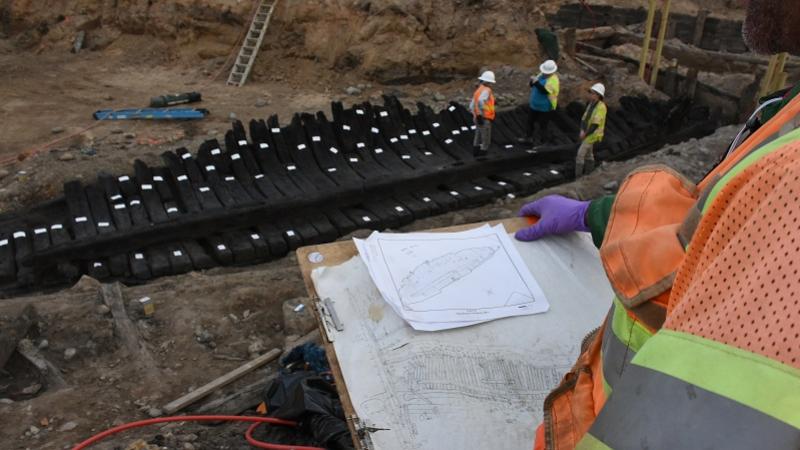 As redevelopment takes place, archaeologists are learning more about the city’s past. Learn about recent archaeological work in the city. 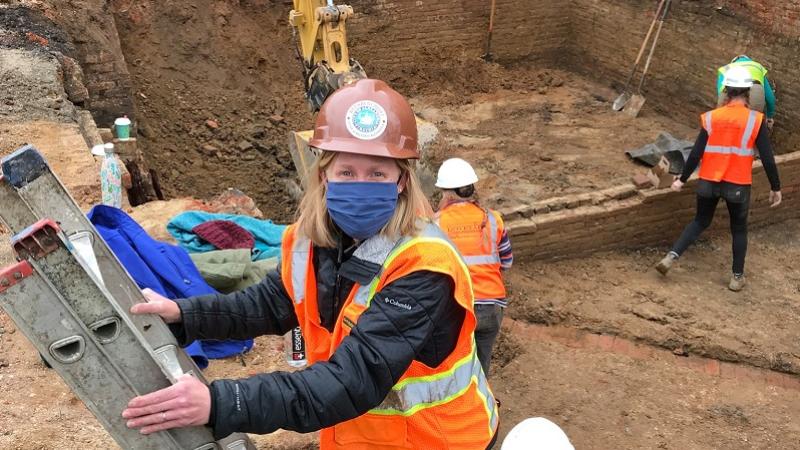 Search past archaeological projects in the city, including reports and other publications. The bibliography includes site reports and public summaries, as well as books, journal articles and in-house publications. 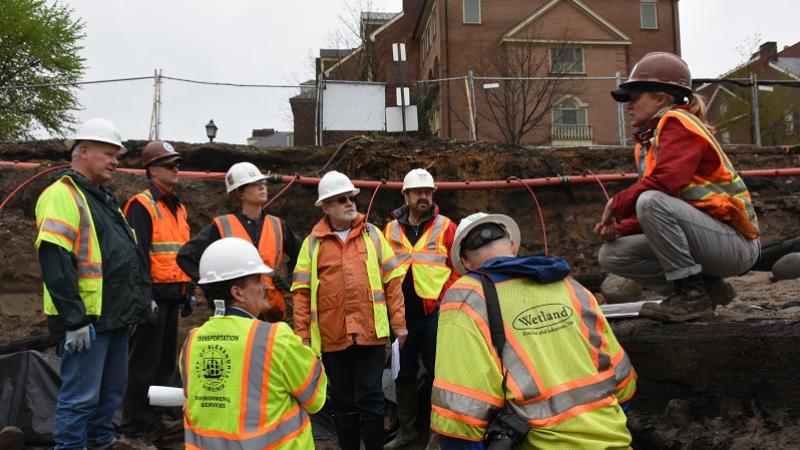 Alexandria Archaeology reviews development projects to determine their impact on archaeological resources, and administers the Archaeology Protection Code of the City of Alexandria, Virginia, included in the City’s Zoning Ordinance. 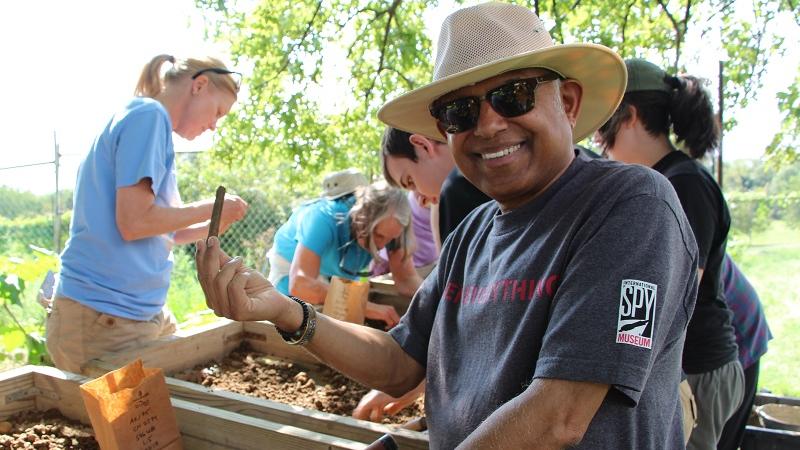 Alexandria Archaeology offers tours, lectures, and programs for adults and children. View videos of past lectures, take a self-guided tour, or check out upcoming events on the calendar. 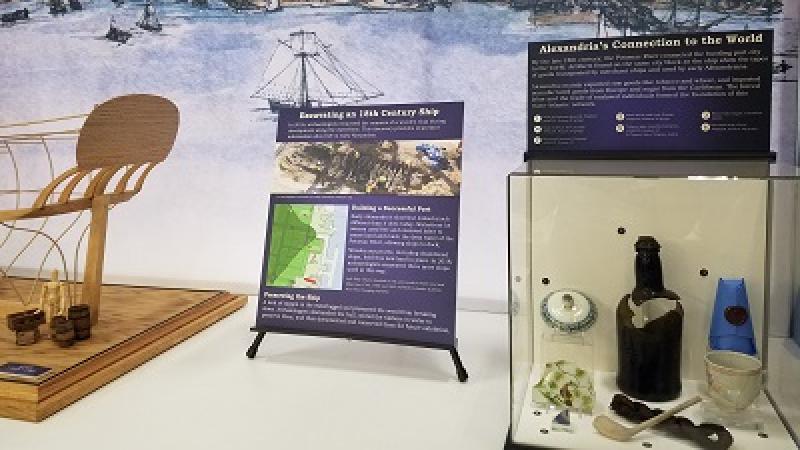 Check out what is on view in the museum. Current exhibits include Archaeologists at Work: The Lee Street Site, Preserving Alexandria’s Maritime Heritage, and hands-on activities that show how archaeologists study Alexandria’s past. 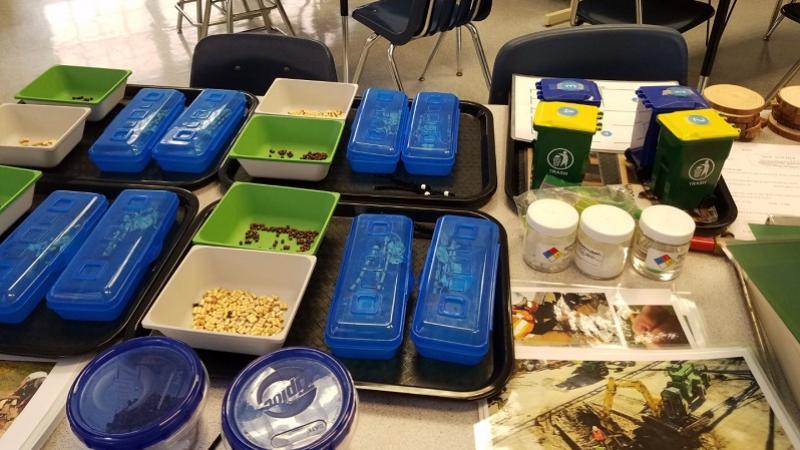 Alexandria Archaeology offers programs for schools and other groups, a summer camp for teenagers, and internships for college students. 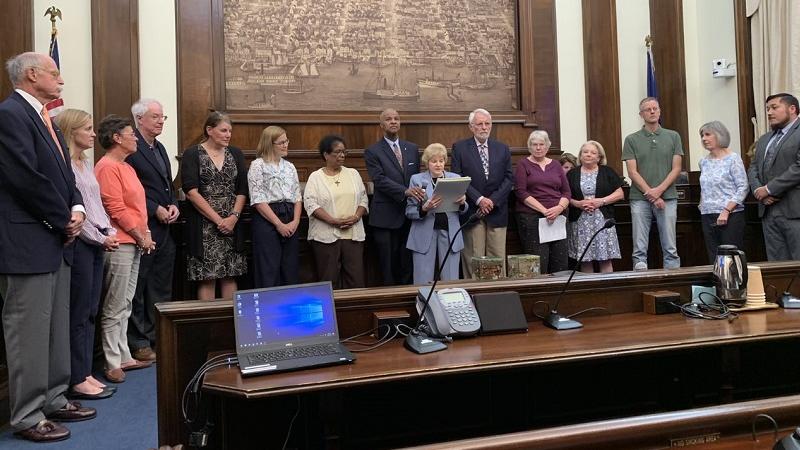 The mission of the AAC is to establish goals and priorities to promote Alexandria Archaeology, encourage volunteerism, and to advise on the preservation and interpretation of Alexandria’s extraordinary sites and collections. 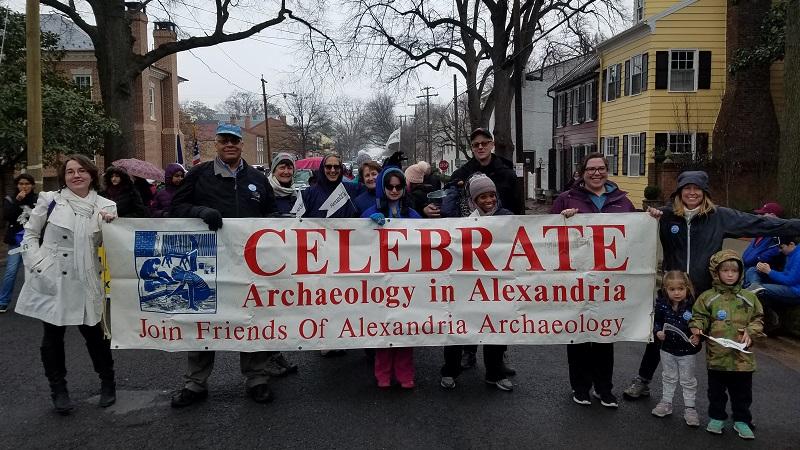 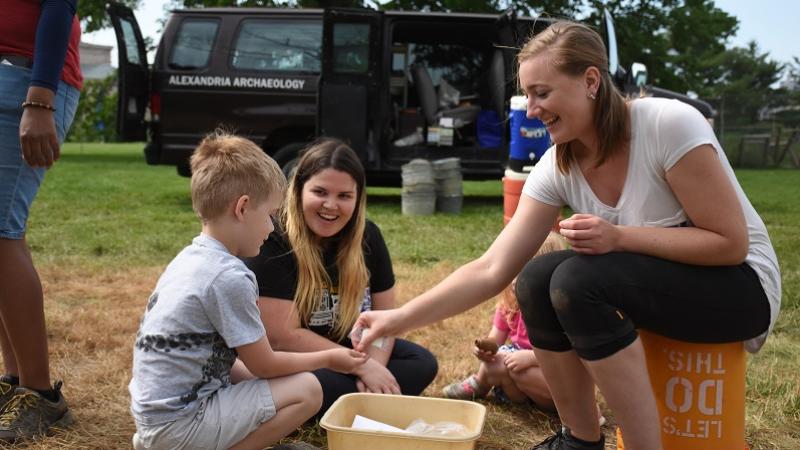 Internship opportunities are available on a limited basis to students who will receive credit through their colleges or universities, or students who have graduated no more than twelve months before the application deadline. 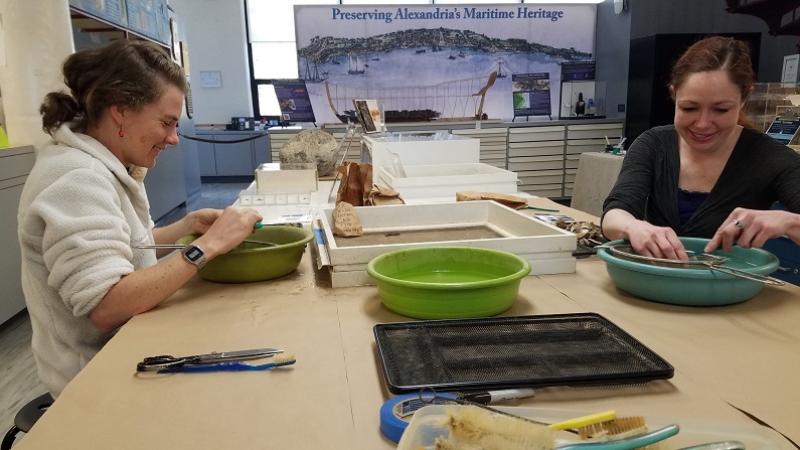 Learn new skills and indulge your curiosity about the past. Historical research, artifact study, educational interpretation, and other opportunities may be seasonally available. Each year more than 100 volunteers work alongside City Archaeologists to discover and share our past.

Stay up to date with the latest events, news, and research by signing up for eNews or following Alexandria Archaeology on social media. 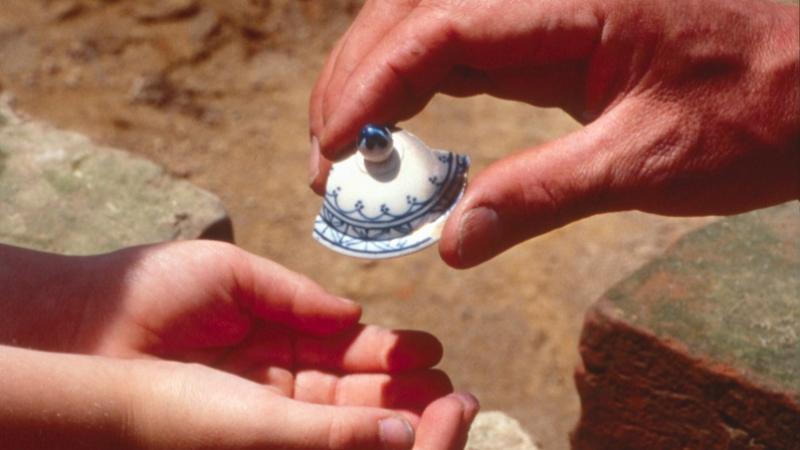 Alexandria Archaeology is dedicated to preserving and studying Alexandria's rich archaeological heritage. Your donation will directly support interpretation of the museum as well as preservation of its collections.

Collections at the Alexandria Archaeology Museum

The Alexandria Archaeology Museum has an extraordinary collection of well-preserved artifacts from excavations in the city of Alexandria, Virginia. The collection plays an important role in relating the history of Alexandria and the history of every-day life in America to students, Alexandria residents, and visitors from around the world. The breadth and depth of this collection make it one of the foremost collections for use in comparative studies in historic and urban archaeology.

Archaeology in the City

Alexandria Slave Pen
At the site of the Alexandria Slave Pen, archaeologists uncovered structural remains relating to the whitewashed brick wall surrounding the men's yard and a line of post holes for posts which once supported a shed roof. A few of the artifacts relate to the slave pen, while others were discarded at the site by soldiers held there during the Civil War when the building was used as a jail. Read the site report. Now known as Freedom House Museum, 1315 Duke Street is open to the public.

Bruin Slave Jail
Joseph Bruin, a slave trader, used the building at 1707 Duke Street from 1844-1861, to house slaves before he shipped them to the south. The Bruin Slave Jail is on the National Register of Historic Places.

Shuter's Hill Plantation
An ongoing excavation on Shuter's Hill near the Masonic Memorial is exploring the Mills/Lee/Dulaney plantation, built in 1782. Excavations have focused on a laundry outbuilding where enslaved African Americans lived and worked. Read a brochure.

The Wilkes Street Pottery
The Wilkes Street Pottery is the site of stoneware potters John Swann and B. C. Milburn. The Virginia Research Center for Archaeology conducted rescue excavations here on four weekends in 1977, recovering thousands of pottery fragments, pieces of kiln furniture used to stack the pottery, and a fragment of a brick interior arch from a kiln. Learn more about the pottery of Swann and Milburn from articles published in Ceramics in America.

Tildon Easton
Tildon Easton, a lesser known potter, manufactured both earthenware and salt-glazed stoneware for a very short period of time, between 1841 and 1843. His kiln, on the 1400 block of King Street, was excavated in 1985. Read A New Look at Old Stoneware: The Pottery of Tildon Easton, in Ceramics in America.

Virginia Glass Company
In 1997, Archaeologists working at the Carlyle development on Duke Street discovered foundations, furnaces, ovens, a chimney base, and thousands of artifacts from the Virginia Glass Company (1894-1916). Archaeologists also found evidence of a fire known to have taken place in 1895, and the fire that destroyed the business in 1916. Read the site report.

Potomac Yard
Alexandria Archaeology has been interested in the history and landscape of Potomac Yard for decades. Since the 1980s, archaeological firms have conducted historical studies and investigations of various segments of the area either for developers as part of the City’s archaeological code or for planning efforts. A vast amount of information has been acquired on the history, prehistoric and historic landscapes, and architecture of the area.

The following archaeological site reports were prepared for the Potomac Yard project:

Two intriguing discoveries were made in Alexandria in 2003 and 2004. These were underground heating structures built by Union troops during the Civil War to heat hospital tents. It is believed that these are the first features of this exact type to be excavated. These structures were called Crimean Ovens and may have been somewhat experimental in nature.

Archaeology of the 500 Block of King Street

The site of the Alexandria Courthouse, on the 500 block of King Street, was the last of the six Urban Renewal blocks to be excavated in the 1960s and 1970s.

Archaeology at the Stabler-Leadbeater Apothecary Shop

Between 1982 and 1989, Alexandria Archaeology conducted a series of excavations in the cellar of the Stabler-Leadbeater Apothecary Museum at 105-107 South Fairfax Street. City archaeologists and volunteers excavated two brick-lined shafts, portions of the old earthen floor, and half of a trash pit that pre-dated the brick buildings housing the Apothecary Shop.

Human occupation of Alexandria began thousands of years before the arrival of Europeans. Despite the past 250 years of construction and development, remnants of this Native American past still remain buried within the City. To date, archaeologists have identified more than 30 sites containing Indian artifacts and features and have registered them with the Virginia Department of Historic Resources.

Archaeology on the Waterfront

As redevelopment takes place along Alexandria's waterfront, archaeologists are exploring the properties undergoing development. Excavations took place in 2015-2016 at the Hotel Indigo Site at 220 S. Union Street and in 2017-2018 at Robinson Terminal South, at 2 Duke Street.

At the Hotel Indigo Site, Archaeologists uncovered the remains of the hull of a fifty-foot vessel, as well as John Carlyle's 1755 public warehouse. Excavation took place in 2015-2016, and remains of this ship and warehouse are now undergoing conservation.

At Robinson Terminal South archaeologists have located the remains of three 18th century ships, as well as foundations of Hooe's 18th century warehouse and store and the 19th century Pioneer Mill.