On June 17, 1995 the Norfolk Southern Corporation presented the Alexandria African American Heritage Park to the City of Alexandria. The nine-acre park is part of a mixed-use Carlyle Development and a satellite site for the Alexandria Black History Museum.

The park may be rented for events through the Alexandria Black History Museum. Call 703.746.4356 for more information.

For park operations and maintenance call 311 or contact the Department of Recreation, Parks and Cultural Activities.

The focal point of the park is a sculpture group of bronze trees called "Truths That Rise From the Roots Remembered." This formation acknowledges the contributions of African Americans to the growth of Alexandria. Other smaller sculptures throughout the park commemorate historic African American Neighborhoods and the people known and unknown buried on this site. A book stand in the park contains a visitors guide which identifies the names of African American citizens and sites etched on the sculptures.

See the Park on a Google 360 Virtual Tour. 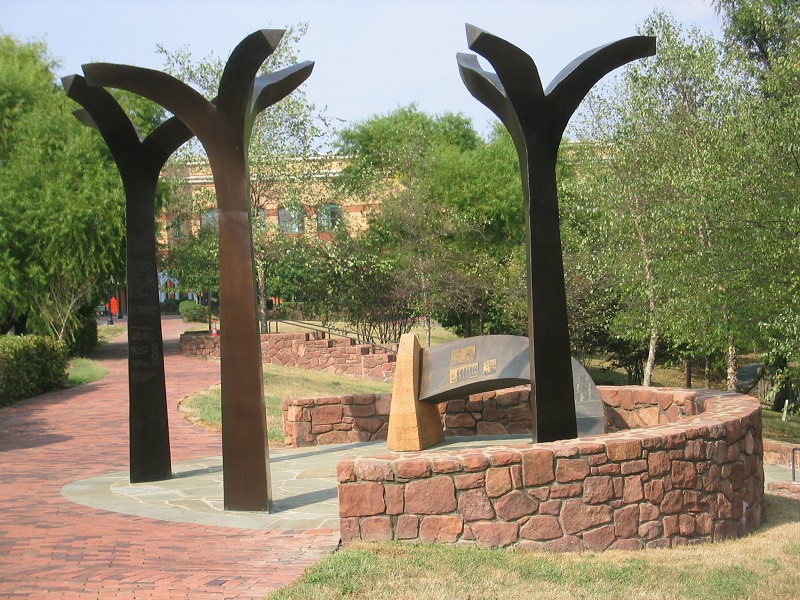 The park includes a one-acre 19th century African American cemetery. Of the more than 20 burials on this site, six identified headstones remain and are in their original location. The park was designed to co-exist with the original landscape of the cemetery and preserves the interesting and varied plant life on this site.

The park also sustains a wetland area that provides a home for mallards, painted turtles, beavers and crayfish in their natural habitat.

In 1885, the Silver Leaf (Colored) Society of Alexandria established the Black Baptist Cemetery just west of the Alexandria National Cemetery. The Silver Leaf Society was one of several burial associations organized by African Americans in the late 19th century. Burial society members paid regular premiums to ensure that upon their deaths they would have a casket, funeral and final resting place. At some point the Black Baptist Cemetery was abandoned and in the mid-20th century, the area was used as a landfill. Development plans in the 1980s and 1990s prompted City and contract archaeologists to study the site. Their discoveries of headstones, footstones, and coffin fragments and hardware revealed the site’s history as a burial ground and ultimately led to its protection.

An archaeological report and a short article by the former City Archaeologist (reprinted below) provide more information about the park's past.

Why would any archaeologist dig Alexandria, Virginia, when greater material and intellectual treasures are buried in Jamestown, Paris, the Holy Lands and Africa? Let me tell you a little story that is now complete after 10 years. It will illustrate why I, as well as other city archaeology staff and thousands of volunteers, have found greater worth in Alexandria’s community heritage than all the fabulous finds around the globe.

I was surprised in 1985 when the person on the telephone asked if I could do a quick study of property along Holland Lane. The caller asked, “Can we put up a homeless shelter? I hear there might be a cemetery.” A whirlwind two-day investigation unearthed the fact that this long-forgotten land preserved African-American history beneath its brambles and silt.

Walter Sanford had written a little to the City in 1976 asking for the mowing of the cemetery on Holland lane and reporting three headstones. Sanford has long been involved with the national Cemetery across Hooff’s Run from Holland Lane. Our reconnaissance of the property in 1985 located only one headstone, with the name Abraham Hunter, who died in 1891 at the age of 37.

Research at the Lloyd House, the history repository of the Alexandria Library, documented that the Baptist Cemetery Association, represented by Thomas Mann, purchased a one-acre parcel on John Street (now Holland Lane) in 1885. This area was at that time in Fairfax County, but was called “West End” by Alexandrians. The cemetery association was composed of members of the Silver Leaf (Colored) Society of Alexandria, Va.

A decision was made not to build a shelter, but a vision was formed in 1985 by Harry Burke and other members of the Society for the Preservation of Black Heritage. Over the years this vision took shape through the dedication of the Ad Hoc Committee on a Memorial to Honor Black Leaders and the generosity of Norfolk Southern Corp. Jean Taylor Federico, director of the Office of Historic Alexandria, and Eugene Thompson, former director of the Alexandria Black History Resource Center, assisted in the creation of this dream. Jerome Meadows designed the magnificent bronze sculptures. Archaeologists and landscape designers worked to ensure that the modern park would complement the historic cemetery.

On June 17, the Alexandria African American Heritage Park was dedicated as a memorial to African-American contributions to Alexandria’s history. The park incorporates the Baptist Cemetery and eight additional acres between Holland Lane and Hooff’s Run just south of Duke Street. It is a natural and meditative place where you can feel the spirit of the past and gain strength of the future.

So why dig Alexandria’s archaeology? Because Alexandrians value historic places and things as precious community resources. History is used to enhance daily living. This is an aspect of the community’s character – to seek balance between old and new, blending graciousness and vitality.