The Union Army occupied Alexandria from the first days of the Civil War to the last. They used the town as a base for supplies, troop transfer, and other logistics, as well as to protect Washington, DC. Alexandria also became an important center for care of the wounded and sick. By the end of the war, more than 30 military hospitals were located in Alexandria, with 6,500 beds.

Churches, homes, the city’s largest hotel, and other buildings were taken over as medical facilities. A Quaker Meetinghouse, a girls’ seminary, a home belonging to the family of Robert E. Lee – all accommodated wounded and diseased patients. Elsewhere, hospital complexes extending over city blocks were built based on plans drawn up by the Quartermaster-General in Washington. Their main features were long, ventilated barracks (usually made of wood) in which patients could be divided into wards.

Surgeons, nurses, orderlies, cooks, and ambulance drivers also came to Alexandria to tend to the patients. Relief workers, volunteers, and worried family members flocked to the hospitals as well.

Little evidence remains of these hospitals. The purpose-built hospitals were dismantled, and many of the confiscated buildings were torn down or substantially changed. We know where most of the hospitals were located, based on the maps drawn up by the Quartermaster Corps and newspapers and other contemporary accounts.

The first general hospital organized under the Surgeon General opened in July 1861, in the Old Hallowell School. It soon became clear that many more facilities were needed in Alexandria, Washington, and Georgetown. The quartermaster in charge for a good part of the war, Capt. J.G.C. Lee, recalled in 1901 “By rail at first, and afterward by steam boat, they [the wounded] poured in. The first telegram received by me from the commanding general read, ‘Send to the front three carloads of ice. Prepare to care for ten thousand wounded.’”

In September 1862, the hospital system was organized by Division. (The Army of the Potomac, which fought mostly on the East Coast, was organized into three divisions.) Each division had a primary general hospital, with other nearby buildings as its branches. Officially, the branches were considered wards and were numbered off of their main hospital, but had names in popular usage. In addition to the Division hospitals, some specialized hospitals added an unknown, but relatively small number of beds to the total the city could accommodate.

On Christmas Eve 1862, Julia Wilbur, a Quaker woman from upstate New York who came to Alexandria as a Freedmen’s aid worker, wrote in a letter to Anna Barnes:

“You at a distance cannot image what a place this is at present. It was last Friday that 700 wounded were brought here. All day long the ambulances were busy in moving them from the boats to the hospitals. A great many slightly wounded were able to walk & will soon be well. In one hos[pital] I saw one ward filled up. Their wounds had been well dressed & they said they were well cared, they have plenty of blankets, & they were moved just as carefully as could be & laid on those clean white beds as tenderly as it c[oul]d have been done at home….Among all those wounded, suffering men, I heard not a groan nor a complaint.”

For each of the 28 Union hospitals, read a short history, view historic photos and Quartermaster Maps, and learn about the site today. Tour the Hospital Sites with this Walking Tour Brochure. 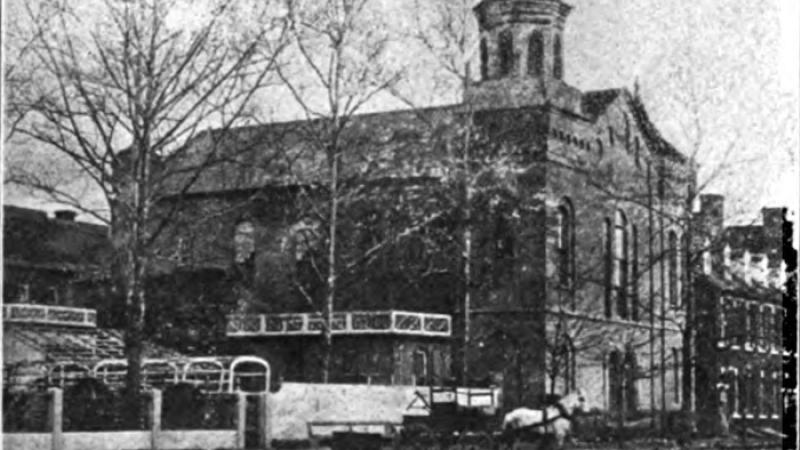 Downtown Baptist Church, at 212 S. Washington Street, was confiscated for use as a hospital in 1862. Read a first-person account from head nurse Clarissa Jones. 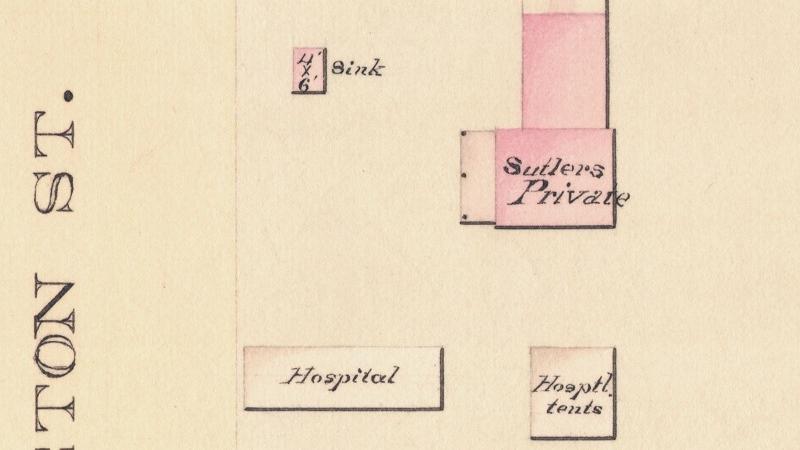 Battery H Hospital, at 907 Pendleton Street from 1863-1865, included a wooden building with hospital tents behind it. The men of Battery H served provost duty under General Slough. 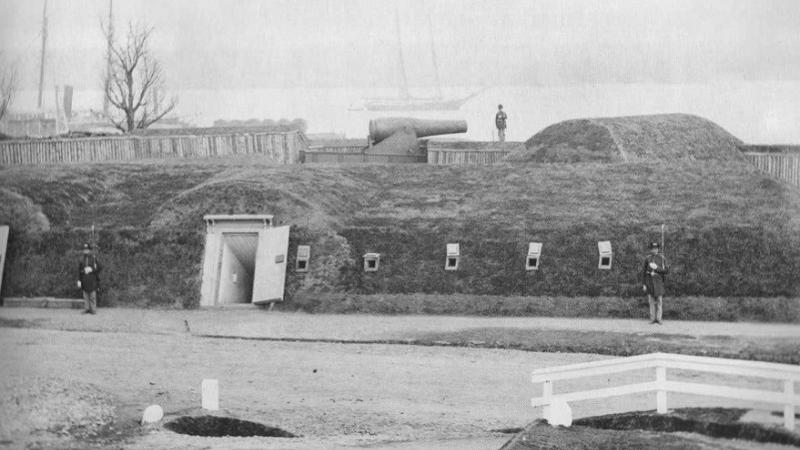 Battery Rodgers Hospital, located at the corner of S. Fairfax and Franklin Streets, was part of a large complex built to protect the Potomac River approaches to Washington. The fort also had two barracks, a prison, a mess hall, and a slaughterhouse. 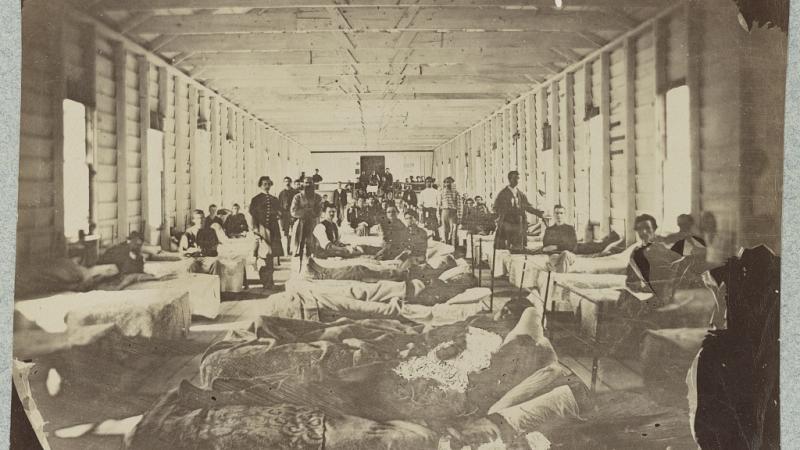 Camp Convalescent, near Shuter's Hill, was set up to house men not well enough to rejoin their regiments but not ill or wounded enough to take up a hospital bed. Known as Camp Misery, the poorly maintained camp was replaced in February 1863 with a new hospital camp outside of Alexandria. 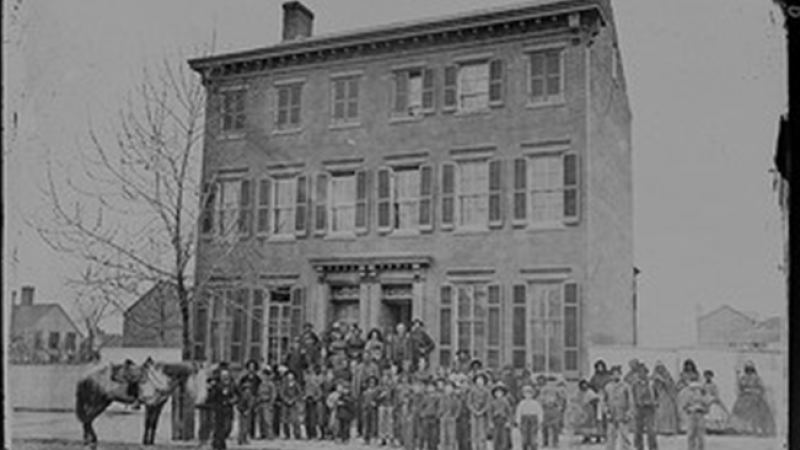 Two residences at 321-323 S. Washington Street were used as a hospital for Contrabands -- former slaves who made their way to freedom in Union territory. 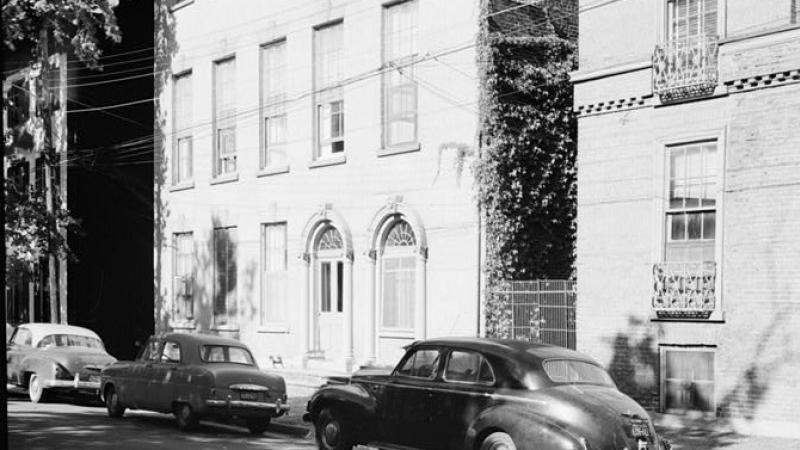 Before Fairfax Street Hospital opened in 1861, the large double house was used as a girls' school. 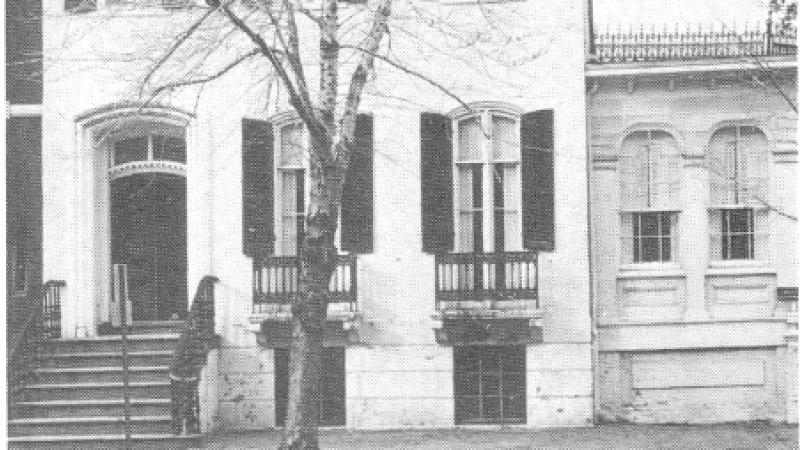 The Fowle Hospital was located in large home at 811 Prince Street. Fowle, a Confederate sympathizer, sued for the return of his home, but died before what was ultimately a successful court decision. 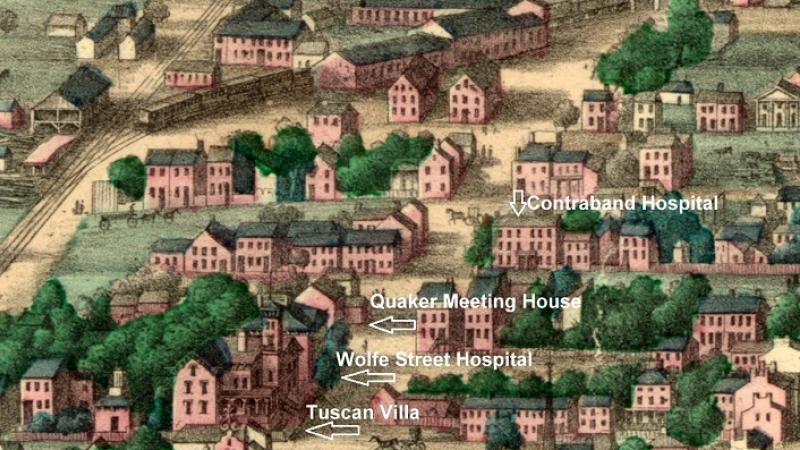 Quaker Meeting House, at 600 Wolfe Street, was used as a hospital for the First Division. 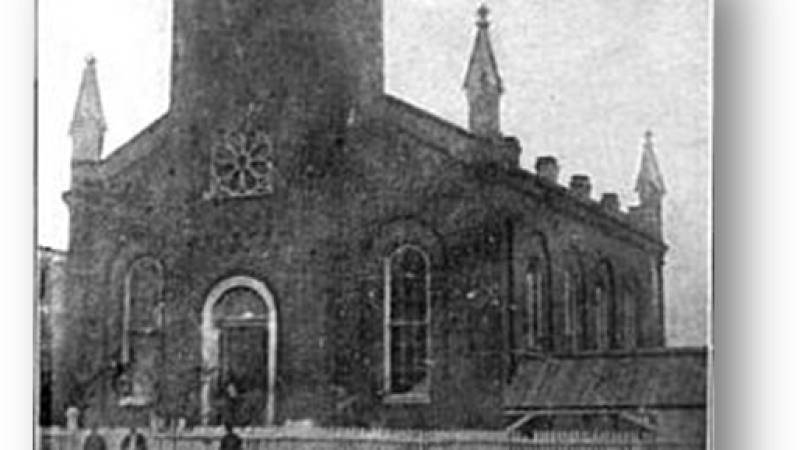 Grace Church General Hospital, at 207-209 S. Patrick Street, was established in 1862, just two years after the Episcopal church's consecration. At first treating only white soldiers, it became a hospital for black soldiers in 1864. 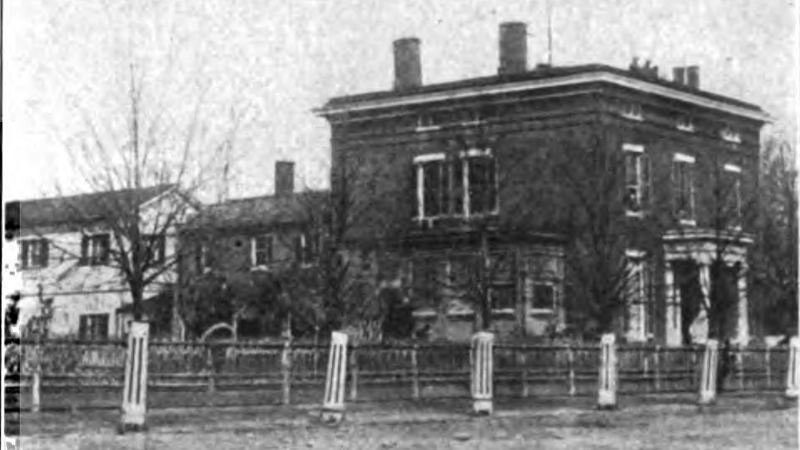 Grosvenor Hospital was located at 414 N. Washington Street. The first blood transfusion in North America was performed at the Grosvenor Branch, which occupied the nearby Lee-Fendall house. 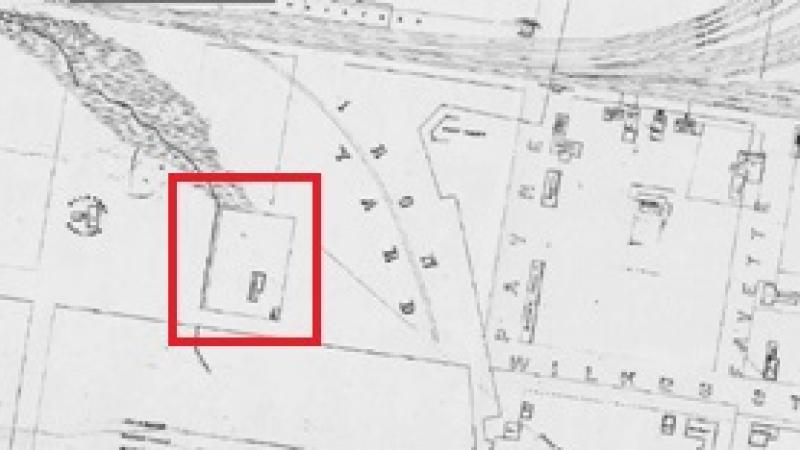 Kalorama Hospital was among a cluster of military buildings on the 1400 block of Wilkes Street. The location is now a part of the Douglas Cemetery. 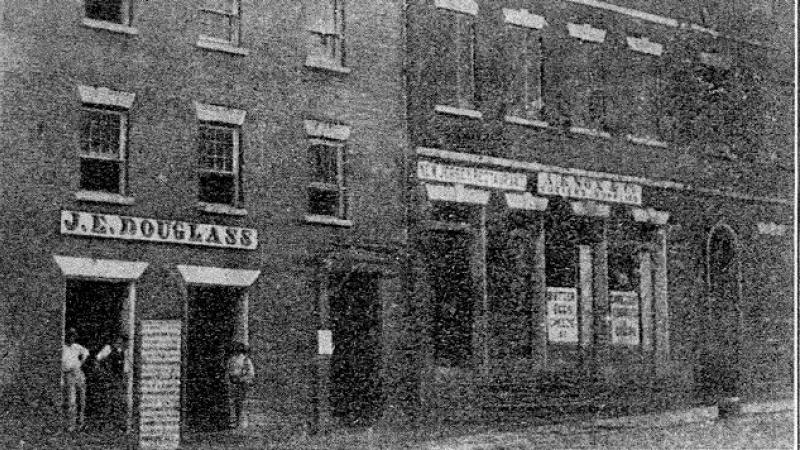 King Street Hospital occupied three brick commercial buildings at 200-204 King Street. Prior to the War, these buildings were used for shops and banks. 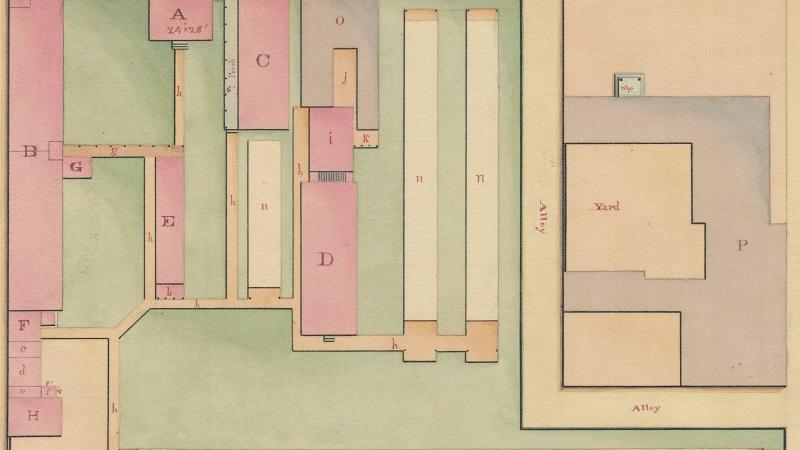 L'Ouverture Hospital, on the block bounded by Prince, Duke, Payne and West Streets, was built for African American troops and contraband civilians. 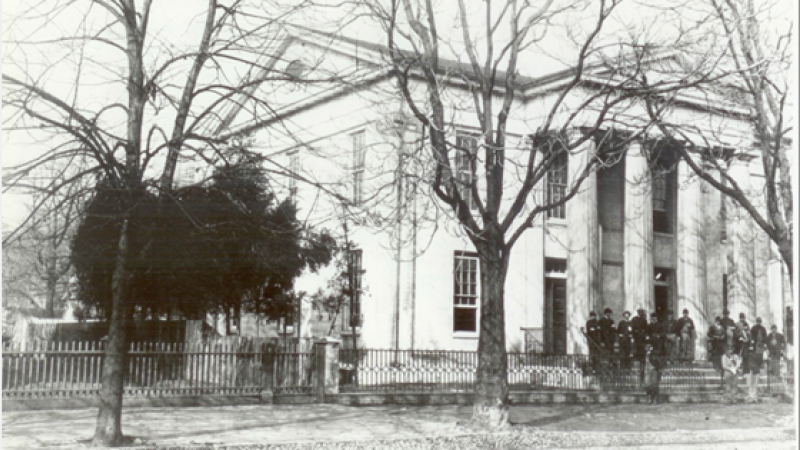 The Lyceum, at 201 S. Washington Street, was built as library and meeting hall in 1839, and is now a City museum. During the war, the Lyceum Hall held 80 beds, and served as a ward of the nearby Downtown Baptist Church General Hospital. 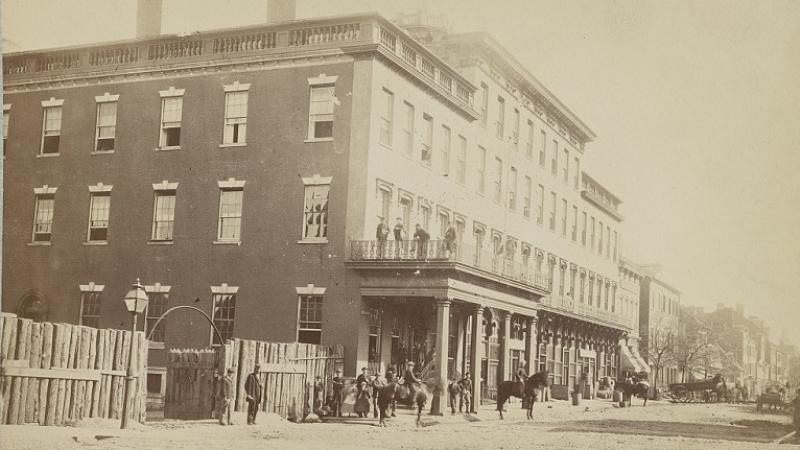 Mansion House Hospital, at 121 N. Fairfax Street, was the largest of the confiscated buildings used as a military hospital in Alexandria, utilizing the former Green’s Hotel. The old, vacant hotel was torn down in the 1970s to restore the historic Carlyle House as a museum and park. 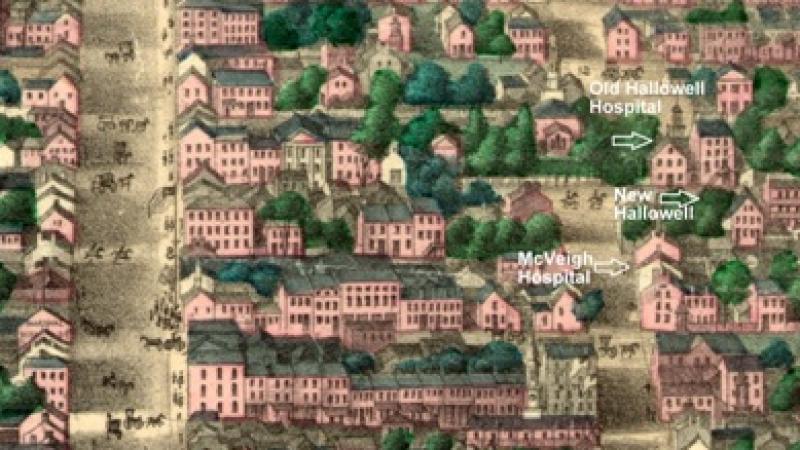 The McVeigh Hospital, at Cameron and St. Asaph Streets, occupied the home of a wealthy Alexandria businessman. McVeigh was tried in absentia for secessionist activities. 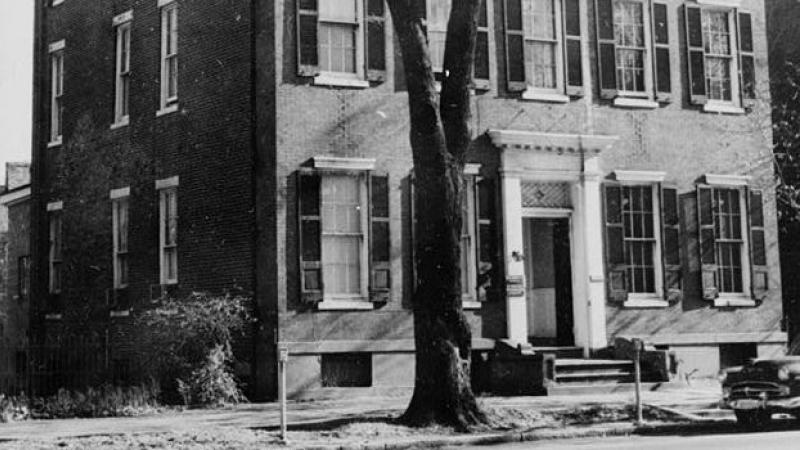 New Hallowell Hospital, at 215 N. Washington Street, was a hospital for officers. It occupied the home of noted Quaker educator Benjamin Hallowell. 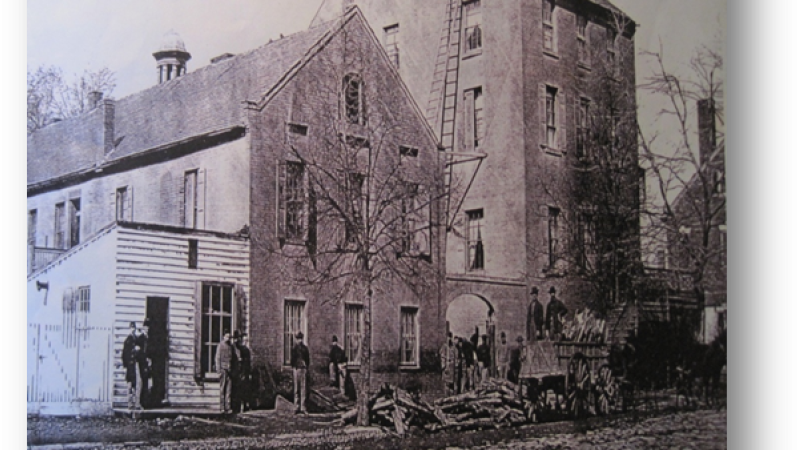 Old Hallowell Hospital, on the west side of the 200 Block of N. Washington Street, formerly used as a school by educator Benjamin Hallowell. 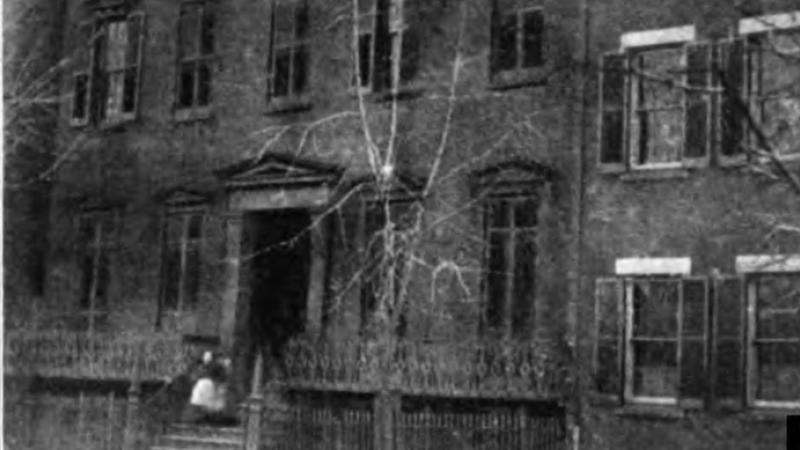 Prince Street Hospital, 806 Prince Street, was a private residence before the war. In 1884 became the hall of the Robert E. Lee Camp of Confederate Veterans, and it is now a museum. 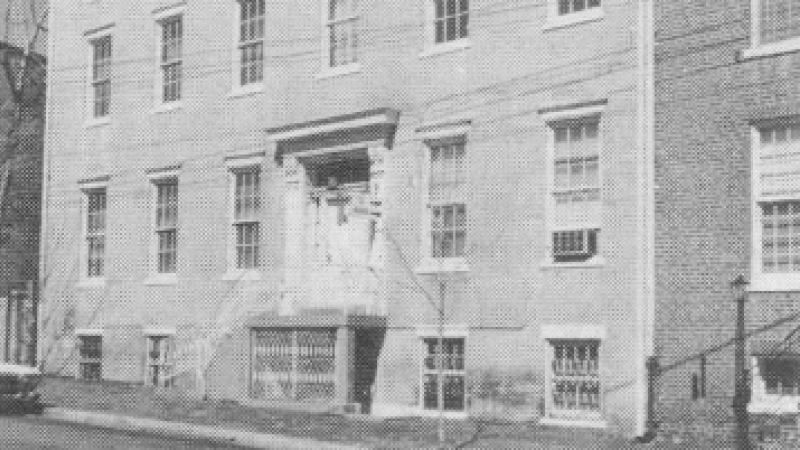 Queen Street Hospital, at 603 Queen Street, was formerly the Bellhaven Female Institute. Today, it is the Anchorage House Condominiums. 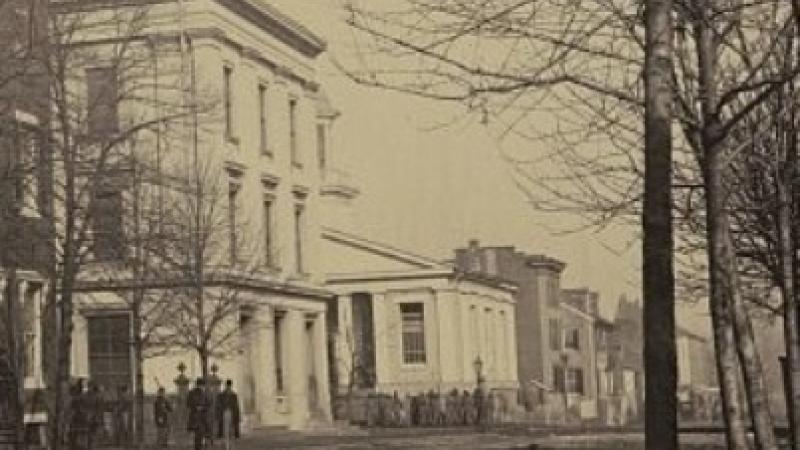 Second Presbyterian Church, at the NW Corner Prince and St. Asaph Streets, was confiscated for use as a hospital for the Provost Guard, forerunners to the U.S. Military Police. 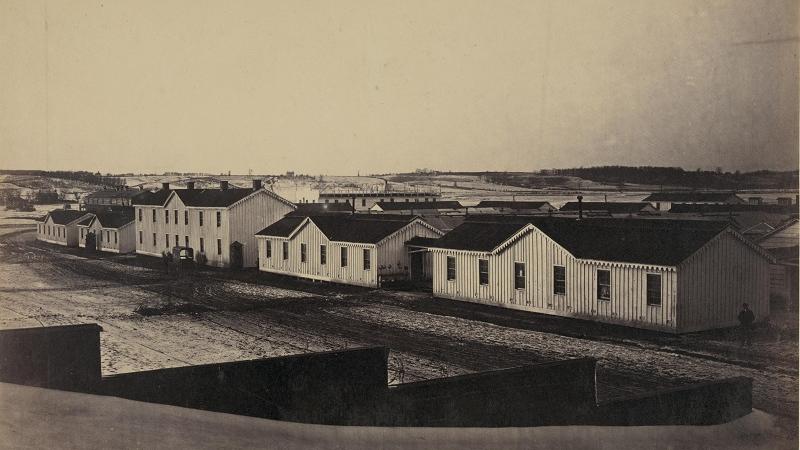 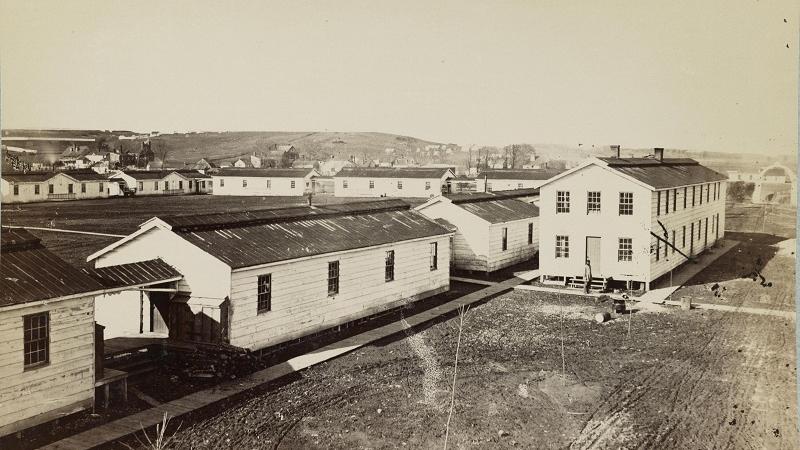 Slough General Hospital, on Duke Street west of Hooff's Run, was built as a barracks for garrison troops. It became a hospital in 1864, and was the last to close. 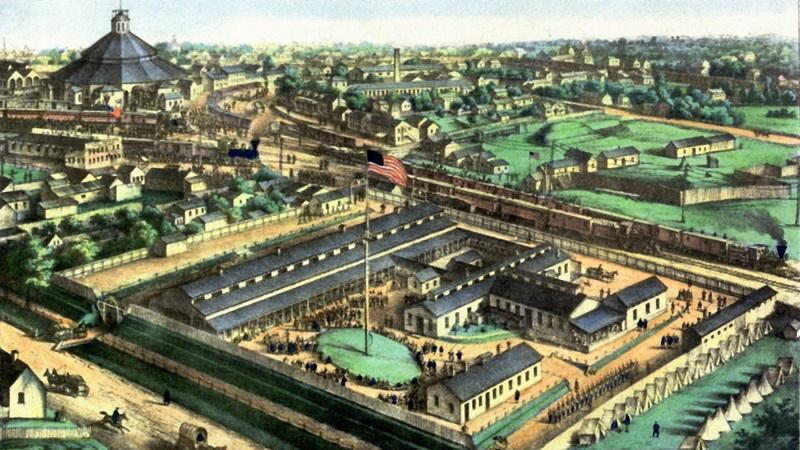 Soldiers Rest, on Duke near West Street, was built near the Orange and Alexandria Rail Road Depot to provide a rest for soldiers traveling through Alexandria by train. The complex was used as a hospital in 1864. 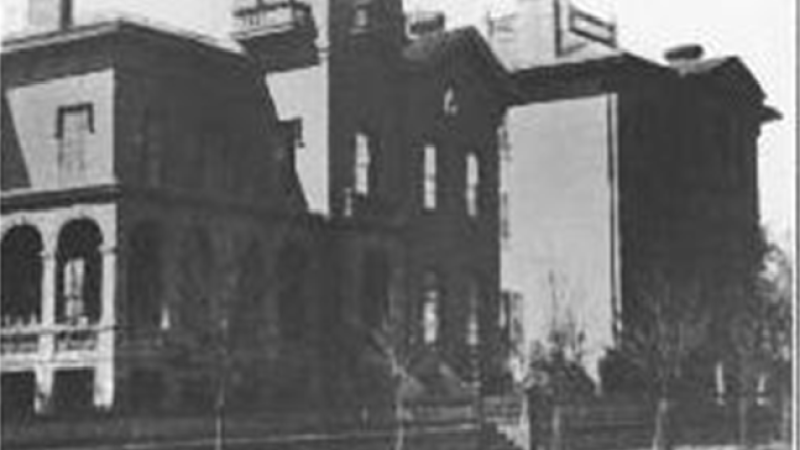 Tuscan Villa, a large private residence at 500-502 Wolfe Street, was confiscated for use as a branch of the Wolfe Street Hospital. 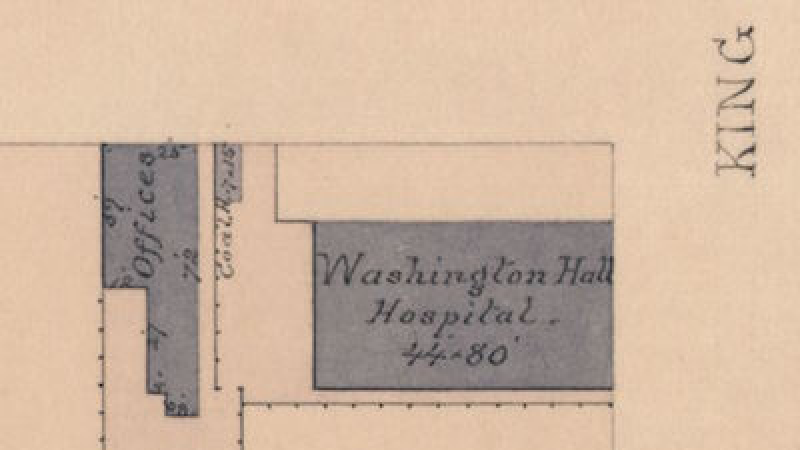 Washington Hall, at 622-626 King Street, was built as a meeting hall, and became a branch of the Second Division General Hospital. 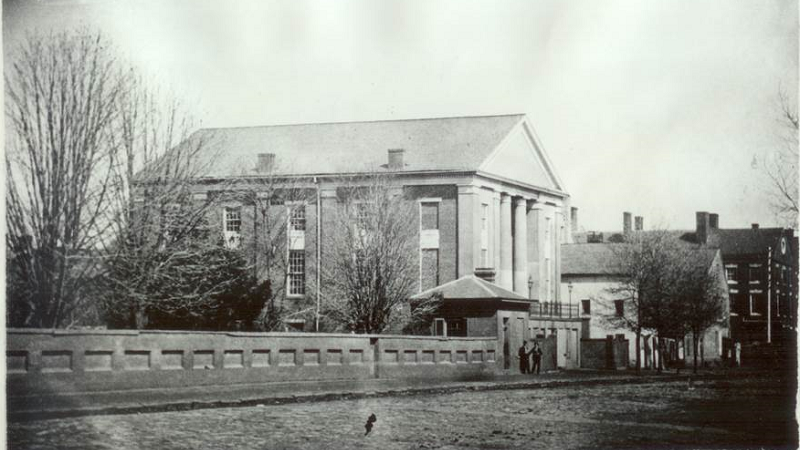 Washington Street Methodist Church, at 115 S. Washington Street, was occupied because of the congregation’s Southern sympathies. The upstairs sanctuary became a hospital and the first floor became a stable. 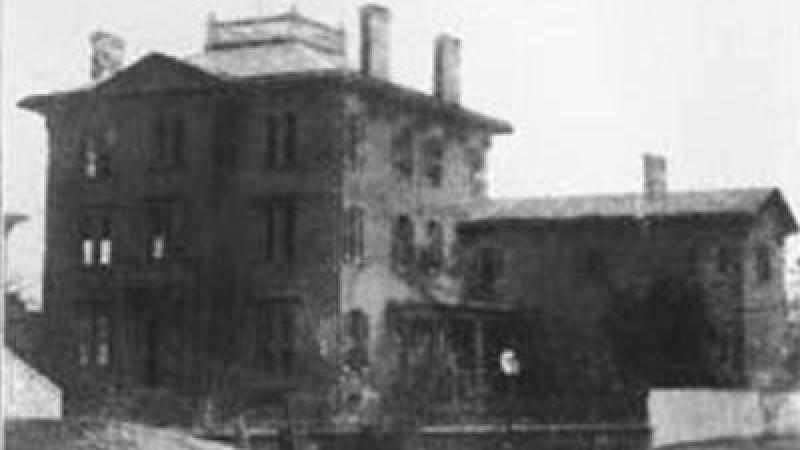 Wolfe Street General Hospital, at 510 Wolfe Street, was first used as a residence or office by Gen. John Slough, Alexandria’s military governor, and then as a hospital with 100 beds.