Learn about the history of the Birthnight Ball and how you can bring elements home to your celebration. 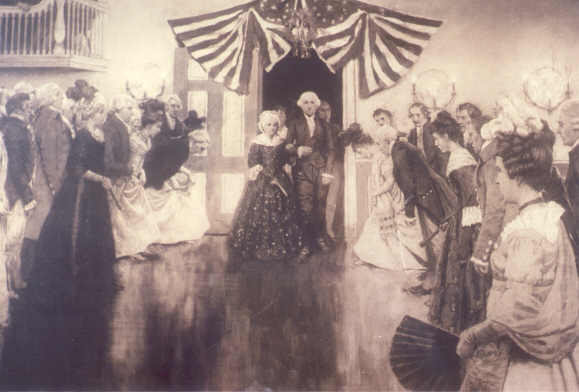 Reservations are required to attend the ball. Celebrate along with costumed interpreters portraying the Washingtons and other notable figures of the day, partake of a period-inspired meal, then join in the 18th century English Country Dancing.

History of the Birthnight Ball

The Birthnight Ball originated in Britain to commemorate and celebrate the birthday of the monarch each year. During and after the Revolution, Americans continued this tradition; however, absent of a monarch, Americans turned to the next closest figure, General George Washington. Winter balls were already common among the elite and celebrating Washington’s birthday became a stylish celebration every February. While there is less evidence of celebrations immediately following the end of the Revolutionary War, they began again in earnest with the election of George Washington as president in 1789.

Letters and newspaper accounts often noted the style of the occasion. It was clearly an event where the elite, or “ladies and gentlemen,” as the papers often called them, could make a statement with their appearance. More than once Washington’s niece Harriot Washington wrote requesting money to purchase items to wear to a Birthnight ball (see letters dated January 5, 1793, January 7, 1794, and February 8, 1796).

With the nation’s capital located in New York and then Philadelphia, Washington was unable to attend Birthnight celebrations in Alexandria while president. His first in Alexandria was in 1798. Washington noted in his diary that he “went with the family to a Ball in Alexa. given by the Citzen[s] of it & its vicinity in commemoration of the Anniversary of my birth day.” The local newspaper, Alexandria Advertiser Times, described the elaborate celebration: “Yesterday was celebrated the Birth Day of our fellow citizen, George Washington. The day was ushered in by a discharge of cannon. In the evening there was a splendid ball at the City Tavern at which George Washington was present. The following toasts were drank by a company of gentlemen who dined together in celebration of the day at the Union accompanied by a discharge of cannon” (published February 13, 1798). Eleanor (Nellie) Park Custis Lewis gave a detailed account of the day in a letter, describing the guests and entertainment that went late into the night.

These 1798 celebrations across the nation, the first to take place with John Adams as president, also revealed some disagreements around celebrating Washington’s birthnight in the young Republic. Some felt it inappropriate to celebrate Washington in a national way after he retired or suggested, if a birthday was to be celebrated nationally, it should be the sitting president’s. In a letter from Thomas Jefferson to James Madison on March 2, 1798, Jefferson noted: “The late birthnight has certainly sown tares among the exclusive federals. It has winnowed the grain from the chaff. The sincerely Adamites did not go. The Washingtonians went religiously, & took the secession of the others in high dudgeon… The whigs went in number, to encourage the idea that the birthnights hitherto kept had been for the General & not the President, and of course that time would bring an end to them.” Madison replied on March 12, 1798, stating “I think the Whigs acted very properly in attending the Birthnight on the principle of appropriating it to the person and not to the office of the late President.” Harrison Gray Otis notedto his wife Sally Foster Otis in a letter dated February 24 of 1798, “As President, he [Washington] ought to know of no distinction among private citizens, whatever may be their merit or virtue.” Abigail Adams declared “In what light would such a step be looked upon by foreign Nations? the President the chief Majestrate of an independent Nation, placing himself in a secondary Character, celebrating Birth Nights, not of a President, but a Private citizen?”

Despite debates, the celebrations continued even after Washington’s passing late in 1799. Lucinda Herbert, a granddaughter of John Carlyle, described the 1805 Birthnight Ball at Gadsby’s City Tavern in a letter to her sister Margaret “Peggy” Herbert Fairfax: “The Birth Night Ball supper was very elegant. A large cake in the center of the table ornamented with an equestrian statue of General Washington, the whole cover’d with a sugar candy net in the form of a cone on the top of which was the American Eagle. A variety of ornamented cakes, Sugar Baskets, Pyramids, West India fruit served on Glass gave a beautiful effect to the whole. There were eleven hundred persons at the City Ball, every room, and even the passages were fill’d with company” (letter in collection of Carlyle House Historic Park).

Find the many of the letters quoted above and more at Founders Online, hosted by the National Archives.

A birthnight ball honoring George Washington has been held at the tavern now known as Gadsby's Tavern Museum since the 1790s. Attendees from recent decades share their memories of the event and how it has changed since the 1990s. The Birthnight Ball has been held at Gadsby's Tavern Museum the Saturday before Presidents Day every year for decades. The ball was held virtually in 2021 and 2022. This short documentary was premiered at the 2022 ball.

The music used in this video was recorded in the museum's Ballroom for the album "Stepping into the 18th Century". The CD can be purchased at Gadsby's Tavern Museum or in our online store.

Birthnight Ball at Gadsby's: A History

Gadsby's Tavern Museum has hosted a birthnight ball in honor of George Washington since the 1790s. Washington even attended twice in 1798 and 1799. This video shares the evolution of an Alexandria tradition spanning four centuries.

Produced by the staff of Gadsby's Tavern Museum for the 2022 virtual Birthnight Ball.

Dancing Assemblies were large-scale events, from the clothes to the food. While you may not be attending a Birthnight Ball, you can still recreate pieces of the tradition at home or school.

"One of sour, two of sweet, three of strong, and four of weak" was the standard for an 18th century rum punch. In addition to ale, wine, and tea, Alexandria taverns would serve their own special rum punch. Follow this tutorial when preparing for your next Ball.

The trends of the late 1790s are illustrated through period fashion plates, photographs from recent Balls at Gadsby's Tavern Museum, and a few pop-culture references to Austen films. Learn the basics of fashionable clothing from this period of history.

Alexander visits members of his family around Old Town Alexandria to collect pieces for his costume for the Mousequerade Ball at Gadsby's Tavern.

Learn More about the Tradition