Alexandria commemorates important anniversaries in the history of our country and our city.

Alexandria was incorporated in 1749, and large celebrations commemorated Alexandria's Bicentennial in 1949, and its 250th anniversary in 1999.

The War of 1812: The War of 1812 and the five-day occupation of Alexandria by British forces in 1814, had a profound effect on the town and its economy. Threatened with an invasion and with insufficient forces to defend the city, Alexandria’s Common Council surrendered to the British without resistance. The city avoided being burned, but the was required to surrender contents of stores and warehouses. Learn more about how the War and occupation affected Alexandria, and view some artifacts from the Historic Alexandria collections.

Centennial (100th anniversary) of the Armistice,2018

The war began in Europe in 1914, and the US entered the war in April of 1917. For a small city in the shadow of the Nation's capital, Alexandria was fully involved in World War I. Over 4,000 residents participated directly in uniform, while hundreds  more worked in war industries including aircraft construction, shipbuilding, and other war-related production. Effects of the war can still be seen in the City today.

The First World War . . . often called “The Great War” by contemporaries and survivors . . . changed the world in many ways.  Never before had mankind witnessed the sort of mass destruction and loss of life that marked this conflict, made even greater through the industrial, chemical, and military technology of the time.  While the United States attempted to maintain a neutral stance, many American citizens clearly viewed Germany as the aggressor in this war, and sought to ease the suffering of French and Belgian civilians from the war’s earliest days.

By 1917, it had become increasingly difficult for the U. S. government to remain neutral.  The slaughter on the Western Front continued with no end in sight.  The sinking of the passenger liner Lusitania in 1915 by a German submarine had outraged many Americans, and after a brief pause, the German Navy was set to resume unrestricted submarine warfare.  This move, coupled with revelation of a secret deal between Germany and Mexico, whereby the latter would attack the United States from the south, are believed to be the main reasons that President Woodrow Wilson finally asked Congress to declare war on Germany in April, 1917.

Alexandrians were already heavily engaged in the First World War in many ways, from sending contributions for French and Belgian relief, to active service in the military and working in war industries.  Many churches and other civic organizations raised money for relief efforts and worked with the local chapter of the American Red Cross to send parcels of medical supplies.  Thousands of local men and women served in all branches of the military, and the city’s Potomac River shoreline buzzed with activity.  Shipyards at either end of the waterfront produced wooden submarine chasers for the U. S. Navy as well as large steel cargo vessels for the merchant marine.  Local companies built experimental seaplanes, attempting to secure a Navy contract.  Embracing the latest in weapons technology, the Navy also began construction of a new torpedo factory.

In 2018, the City of Alexandria joined countless others around the world in commemorating the 100th anniversary of World War I.

Below are a few transcriptions of interviews about Alexandria's World War I veterans. 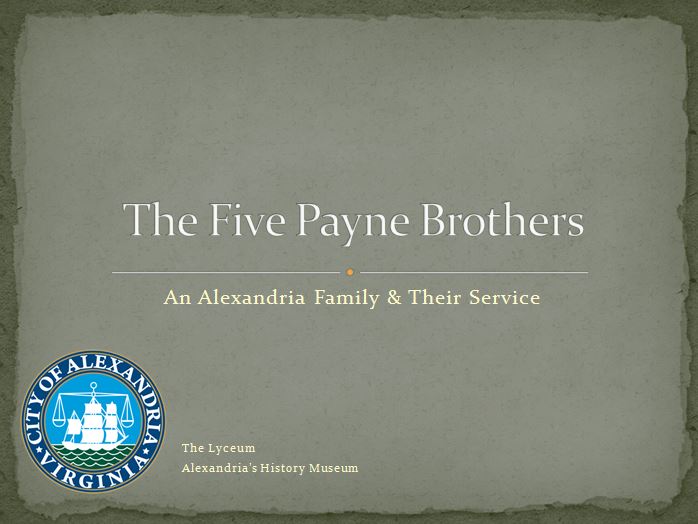 An online exhibit about the Payne Brothers, their life in Alexandria, and their service during World War II commemorated the 75th anniversary of American entry into World War II on December 7, 1941.

The December 7 attack on Pearl Harbor officially launched the United States into the Second World War. Among the more than 16 million Americans who served in the military during that conflict were the five Payne brothers, who were born and raised in Alexandria. Fortunately, all five survived the war despite some harrowing experiences, and all five returned to Alexandria to raise families and to participate in the community in many different ways.

Forgotten: the Untold Story of D-Day's Black Heroes, at Home and at War

As part of the City of Alexandria’s 11th annual D-Day commemoration, Linda Hervieux, Paris-based American journalist, photographer and author of FORGOTTEN: The Untold Story of D-Day's Black Heroes, at Home and at War, shares the story of D-Day’s only African-American combat soldiers, who were effectively written out of the history of the Normandy invasion. Tom Brokaw called FORGOTTEN "utterly compelling," and Douglas Brinkley said "all Americans should read" this battalion's journey through segregated Jim Crow America to unexpected freedom in Britain and France. Hervieux has lectured extensively on the African Americans of D-Day and World War II at Harvard, Princeton, Berkeley, the Imperial War Museum in London, and the National Museum of African American History and Culture in Washington, D.C.

Originally presented June 3, 3021
Sponsored by the City of Alexandria and the Alexandria-Caen Sister City Committee

Alexandria-Caen Sister City Committee's 11th annual D-Day commemoration presents former U.S. Army Historian Dr. Kim Bernard Holien discussing D-Day secrets, known and unknown in a 'Rest of the Story' presentation about the secrets that made the Allies victorious on the 'day of days.' Dr. Kim Bernard Holien was a professional historian with the U.S. Army for 34 years, receiving commendations from the late John Marsh, Secretary of the Army, and President Ronald Reagan. He is the recipient of the 2008 Joseph L. Harsh History Award from the Northern Virginia Association of Historians and the co-recipient of the 2016 T. Michael Miller Alexandria History Award from the Alexandria Historical Society.