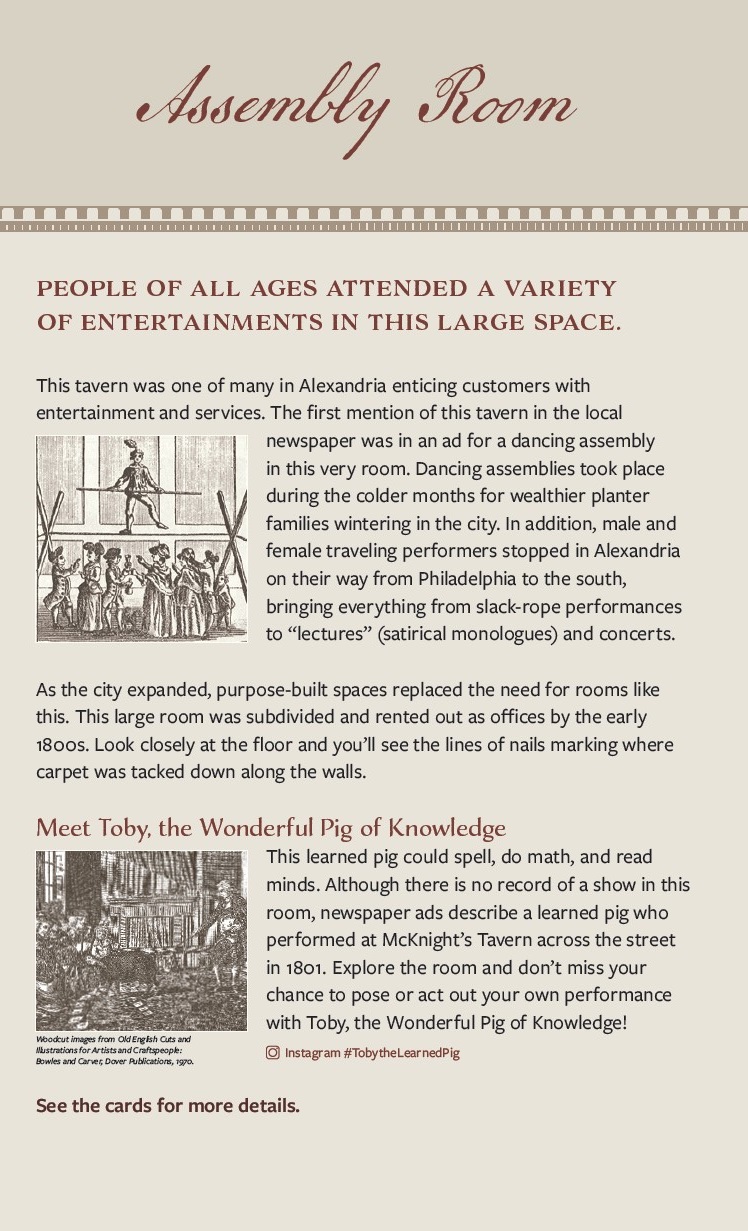 People of all ages attended a variety of entertainments in this large space.

This tavern was one of many in Alexandria enticing customers with entertainment and services. The first mention of this tavern in the local newspaper was in an ad for a dancing assembly in this very room. Dancing assemblies took place during the colder months for wealthier planter families wintering in the city. In addition, male and female traveling performers stopped in Alexandria on their way from Philadelphia to the south, bringing everything from slack-rope performances to “lectures” (satirical monologues) and concerts.

As the city expanded, purpose-built spaces replaced the need for rooms like this. This large room was subdivided and rented out as offices by the early 1800s. Look closely at the floor and you’ll see the lines of nails marking where carpet was tacked down along the walls.

This learned pig could spell, do math, and read minds. Although there is no record of a show in this room, newspaper ads describe a learned pig who performed at McKnight’s Tavern across the street in 1801. Explore the room and don’t miss your chance to pose or act out your own performance with Toby, the Wonderful Pig of Knowledge! 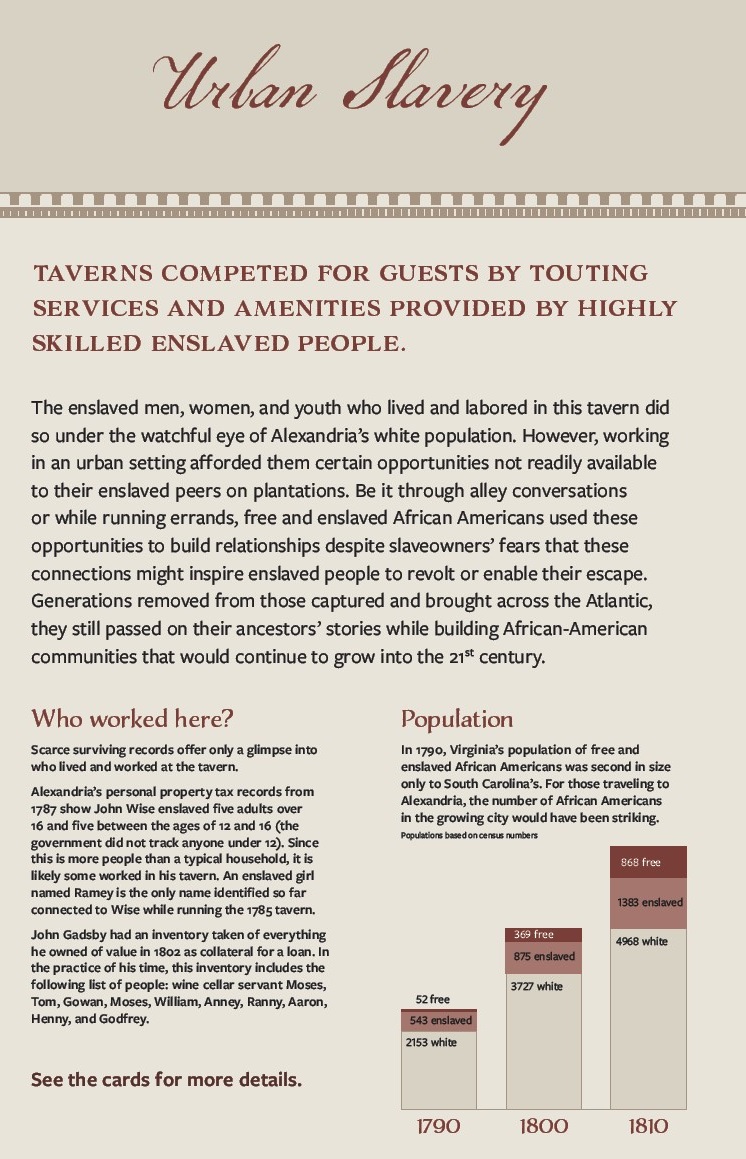 The enslaved men, women, and youth who lived and labored in this tavern did so under the watchful eye of Alexandria’s white population. However, working in an urban setting afforded them certain opportunities not readily available to their enslaved peers on plantations. Be it through alley conversations or while running errands, free and enslaved African Americans used these opportunities to build relationships despite slaveowners’ fears that these connections might inspire enslaved people to revolt or enable their escape. Generations removed from those captured and brought across the Atlantic, they still passed on their ancestors’ stories while building African American communities that would continue to grow into the 21st century.

Who worked here? Scarce surviving records offer only a glimpse into who lived and worked at the tavern.

Alexandria’s personal property tax records from 1787 show John Wise enslaved five adults over 16 and five between the ages of 12 and 16 (the government did not track anyone under 12). Since this is more people than a typical household, it is likely some worked at his tavern. An enslaved girl named Ramey is the only name identified so far connected to Wise while running the 1785 tavern.

John Gadsby had an inventory taken of everything he owned of value in 1802 as collateral for a loan. In the practice of his time, this inventory includes the following list of people: wine cellar servant Moses, Tom, Gowan, Moses, William, Anney, Ranny, Aaron, Henny, and Godfrey.

Population: In 1790, Virginia’s population of free and enslaved African Americans was second in size only to South Carolina’s. For those traveling to Alexandria, the number of African Americans in the growing city would have been striking. Population based on census numbers. 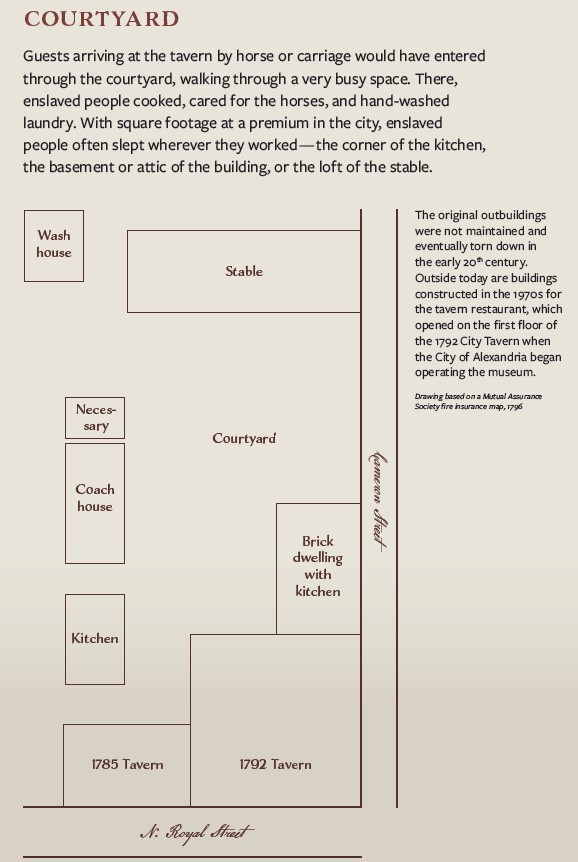 Guests arriving at the tavern by horse or carriage would have entered through the courtyard, walking through a very busy space. There, enslaved people cooked, cared for the horses, and hand-washed laundry. With square footage at a premium in the city, enslaved people often slept wherever they worked—the corner of the kitchen, the basement or attic of the building, or the loft of the stable.

The original outbuildings were not maintained and eventually torn down in the early 20th century. Outside today are buildings constructed in the 1970s for the tavern restaurant, which opened on the first floor of the 1792 City Tavern when the City of Alexandria began operating the museum. Drawing based on a Mutual Assurance Society fire insurance map, 1796. 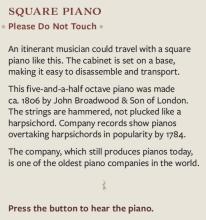 An itinerant musician could travel with a square piano like this. The cabinet is set on a base, making it easy to dissemble and transport.

This five-and-a-half octave piano was made ca. 1806 by John Broadwood & Son of London. The strings are hammered, not plucked like a harpsichord. Company records show pianos overtaking harpsichords in popularity by 1784.

The company, which still produces pianos today, is one of the oldest piano companies in the world.

Listen to the Piano.

On storage door by piano: This looks like a secret door, but it was simply hidden storage for the tavern. Museum staff use it today to store emergency supplies.

In stairwell to dormer: Upstairs to the Sleeping Rooms. Taverns only promised travelers a space to sleep and “clean” sheets.