Changes in the 19th Century 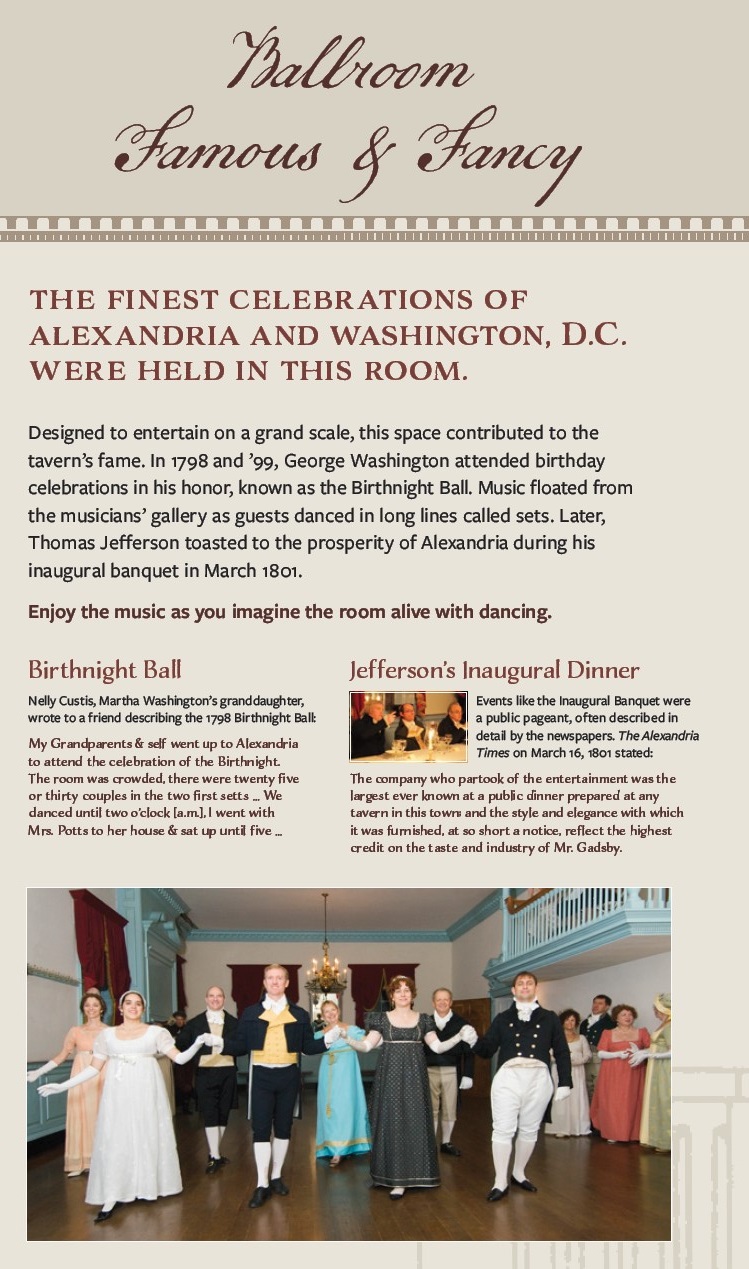 The finest celebrations of Alexandria and Washington, D.C. were held in this room.

Designed to entertain on a grand scale, this space contributed to the tavern’s fame. In 1798 and ’99, George Washington attended birthday celebrations in his honor, known as the Birthnight Ball. Music floated from the musicians’ gallery as guests danced in long lines called sets. Later, Thomas Jefferson toasted to the prosperity of Alexandria during his inaugural banquet in March 1801.

Enjoy the music as you imagine the room alive with dancing.
Listen to Wakefield Hunt, from Stepping into the 18th-Century. The CD is available for purchase at the museum and online at The Alexandria Shop.

Nelly Custis, Martha Washington’s granddaughter, wrote to a friend describing the 1798 Birthnight Ball: “My Grandparents & self went up to Alexandria to attend the celebration of the Birthnight. The room was crowded. There were twenty-five or thirty couples in the two first setts…We danced until two o’ clock [a.m.], I went with Mrs. Potts to her house & sat up until five…”

Events like the Inaugural Banquet  were a public pageant, often described in detail by the newspapers. The Alexandria Times on March 16, 1801 stated:

“The company who partook of the entertainment was the largest ever known at a public dinner prepared at any tavern in this town; and the style and elegance with which it was furnished, at so short a notice, reflect the highest credit on the taste and industry of Mr. Gadsby.” 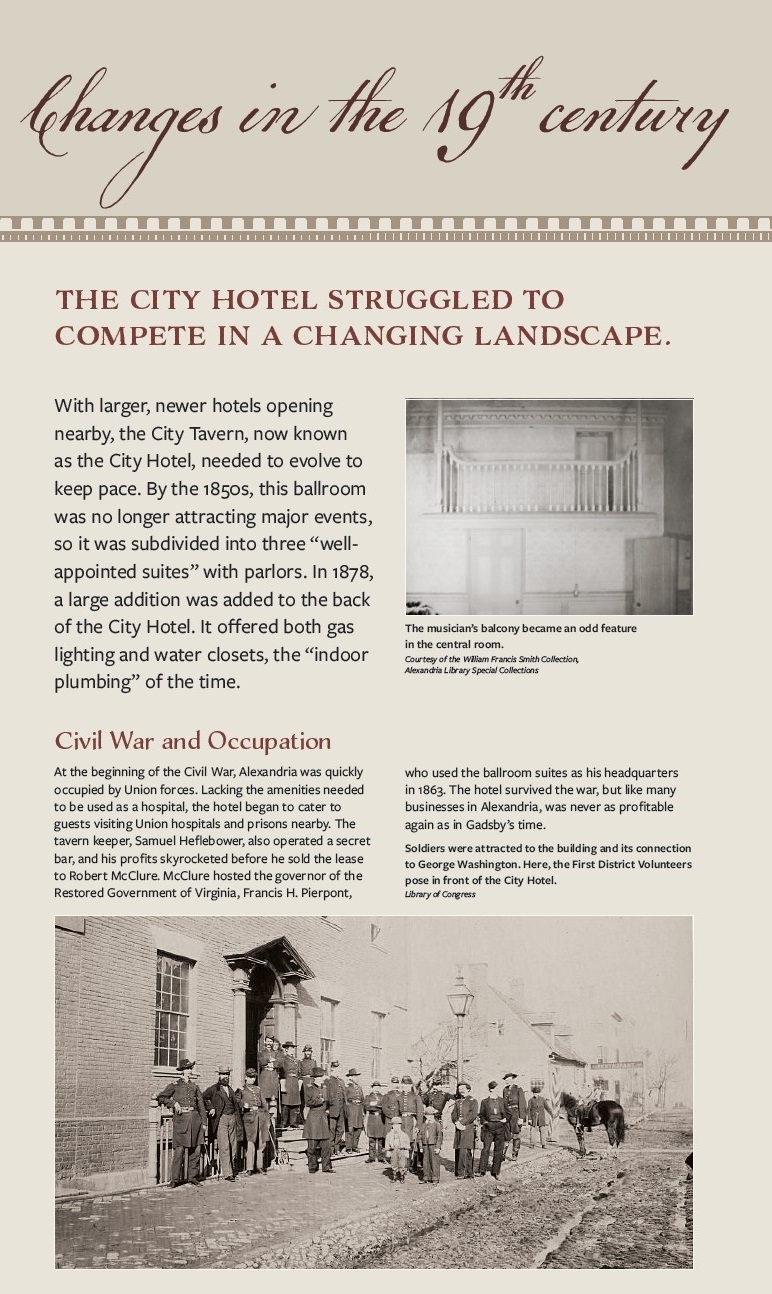 Changes in the 19th century

The City Hotel struggled to compete in a changing landscape.

With larger, newer hotels opening nearby, the City Tavern, now known as the City Hotel, needed to evolve to keep pace. By the 1850s, this ballroom was no longer attracting major events, so it was subdivided into three “well-appointed suites” with parlors. In 1878, a large addition was added to the back of the City Hotel. It offered both gas lighting and water closets, the “indoor plumbing” of the time.

At the beginning of the Civil War, Alexandria was quickly occupied by Union forces. Lacking the amenities needed to be used as a hospital, the hotel began to cater to guests visiting Union hospitals and prisons nearby. The tavern keepers, Samuel Heflebower, also operated a secret bar, and his profits skyrocketed before he sold the lease to Robert McClure. McClure hosted the governor of the Restored Government of Virginia, Francis H. Pierpont, who used the ballroom suites as his headquarters in 1863. The hotel survived the war, but like many businesses in Alexandria, was never as profitable again as in Gadsby’s time.

[Civil War photo at bottom] Soldiers were attracted to the building and its connection to George Washington. Here, the First District Volunteers  pose in front of the City Hotel. 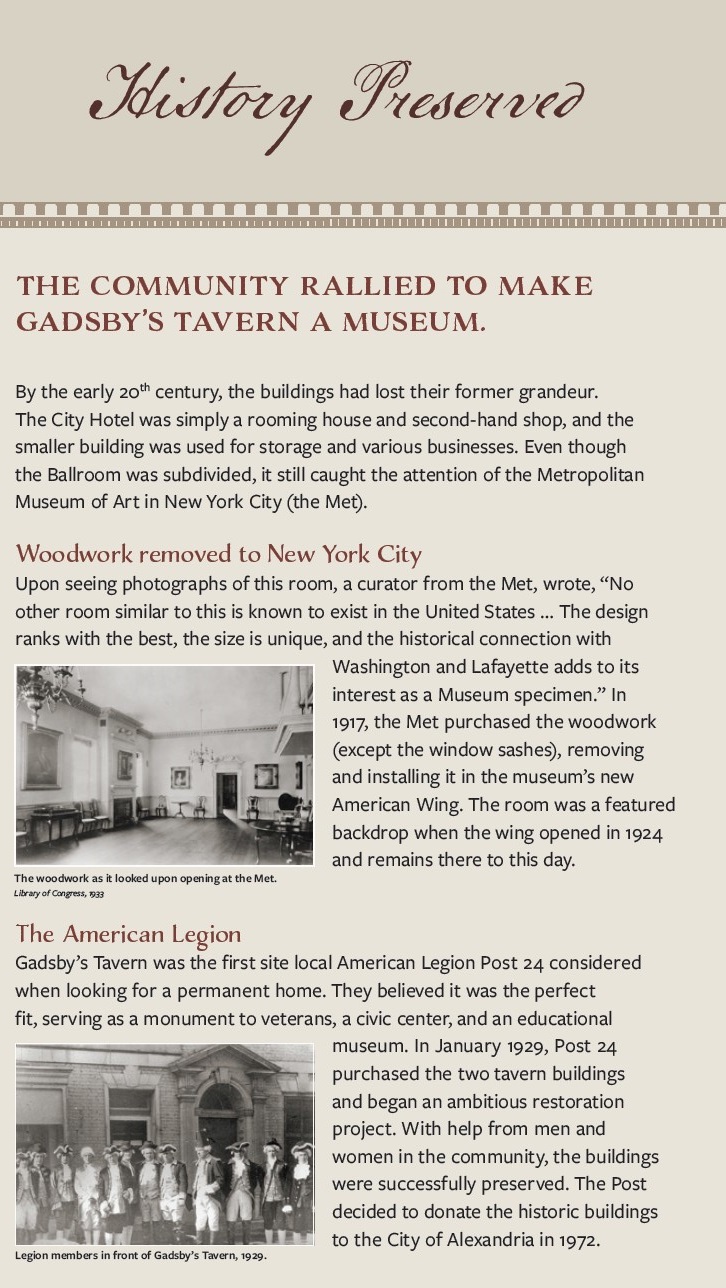 The community rallied to make Gadsby’s Tavern a museum.

By the early 20th century, the buildings had lost their former grandeur. The City Hotel was simply a rooming house and second-hand shop, and the smaller building was used for storage and various businesses. Even though the Ballroom was subdivided, it still caught the attention of the Metropolitan Museum of Art in New York City (the Met).

Upon seeing photographs of this room, a curator from the Met wrote, “No other room similar to this is known to exist in the United States…The design ranks with the best, the size is unique, and the historical connection with Washington and Lafayette adds to its interest as a Museum specimen.” In 1917, the Met purchased the woodwork (except the window sashes), removing and installing it in the museum’s new American Wing. The room was a featured backdrop when the wing opened in 1924 and remains there to this day.

[room image]: The woodwork as it looked upon opening at the Met

Gadsby’s Tavern was the first site local American Legion Post 24 considered when looking for a permanent home. They believed it was the perfect fit, serving as a monument to veterans, a civic center, and an educational museum. In January 1929, Post 24 purchased the two tavern buildings and began an ambitious restoration project. With help from men and women in the community, the buildings were successfully preserved. The Post decided to donate the historic buildings to the City of Alexandria in 1972. 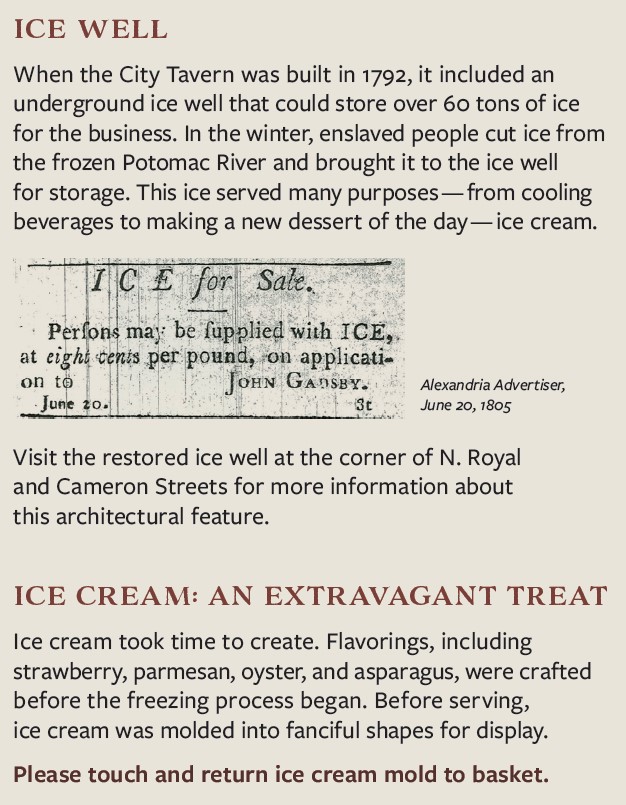 When the City Tavern was built in 1792, it included an underground ice well that could store over 60 tons of ice for the business. In the winter, enslaved people cut ice from the frozen Potomac River and brought it to the ice well for storage. This ice served many purposes—from cooling beverages to making a new dessert of the day—ice cream. Visit the restored ice well at the corner of N. Royal and Cameron Streets for more information about this architectural feature.

Ice Cream took time to create. Flavorings, including strawberry, parmesan, oyster, and asparagus, were crafted before the freezing process began. Before serving, ice cream was molded into fanciful shapes for display.