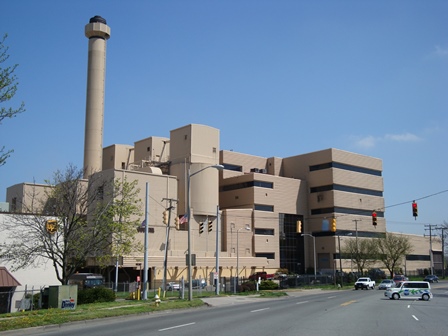 The Alexandria/Arlington Waste-to-Energy Facility located at 5301 Eisenhower Avenue in Alexandria was jointly developed by the City of Alexandria and Arlington County (the Jurisdictions) to handle the waste from the two Jurisdictions.  It has been in continuous operation since February 1988, is operated by Covanta Arlington/Alexandria, Inc. (Covanta), and is capable of handling 975 tons of waste each day, while producing 21 megawatts (MW) of energy. The Facility was determined to be the most environmentally sustainable means of disposing of waste generated by the Jurisdictions after reduction, reuse and recycling, and has had a stellar environmental record, achieving emissions well below United States Environmental Protection Agency (EPA) permitted levels.

In January 2012, the Jurisdictions entered into a new Waste Disposal and Services Agreement (WDSA) with Covanta for processing waste at the Facility at a rate considered to be below market rate, beginning in January 2013, once the original bonds which were used to finance the facility and various air quality improvements were paid off.  This Agreement was approved unanimously by both the City Council and the County Board, originally for a period through June 30, 2019.  The WDSA also provided the Jurisdictions the unilateral right to extend the agreement through December 31, 2038, and that extension was subsequently entered into in November 2013, since it was found to be economically beneficial to both Jurisdictions.

The WDSA addresses numerous issues including requirements for waste delivery, including what waste is acceptable or not acceptable, recourse if the plant is unavailable, how changes in law are handled, how fees are handled including fees to be charged if the Jurisdictions exceed annual tonnage limits, payment methods, limitations on liability, protocols to be followed in extraordinary events such as hurricanes, radiation-detection protocols, and continued community outreach by the Company, among others.

The Facility Monitoring Group (FMG) was established in January 2013 by the City of Alexandria and Arlington County (the Jurisdictions) to be the single point of contact for Covanta, the owner and operator of the waste-to-energy facility, to handle the routine operational monitoring, financial management and maintenance of the facility.

The FMG is governed by the Inter-jurisdictional Joint Action Agreement Regarding the Arlington/Alexandria Waste-to-Energy Facility, which describes the rights and duties of the Jurisdictions under the WDSA, and describes the details of the relationship between the City and County, and how the group will function.  The FMG meets on a quarterly basis to discuss the operation of the facility, which is based upon operational data provided by Covanta, which is reviewed and supplemented by a quarterly inspection of the facility. Major environmental and/or capital repairs and improvements, changes-in-law and other major issues revolving around the facility are also discussed at these meetings. Since the facility currently serves both Jurisdictions by providing for an environmentally sound means of disposal for its solid waste, and both the facility and the property that it sits on will revert back to Jurisdictional ownership in 2038, the continued maintenance and upkeep of this Jurisdictional asset is key to having a reliable means of waste disposal into the future.

Continuous emissions monitoring is an important tool in determining a Waste-to-Energy facility's compliance with the strict emission limits set forth in its operating permit, which is established in accordance with the federal Clean Air Act and Virginia's strict regulatory requirements. This data is publicly available online on the COVANTA website.

The FMG meets quarterly and meeting materials are recorded below.

In January 2012, Alexandria and Arlington entered into a new Waste Disposal and Service Agreement with Covanta Energy for processing the Jurisdictions' solid waste. This contract had been approved unanimously by both the City Council and County Board and established an initial term through 2019.

However, this new Agreement left open several decisions that needed to be made for the continued use of the facility by the Jurisdictions. So, as part of the 2012 approval process the Council and Board directed staff to conduct a third-party economic analysis to evaluate the agreement, extension options and costs of waste disposal alternatives to support their decision-making process. The analysis was completed in 2013, with the goal of deciding whether or not the jurisdictions should extend the term of the agreement, and if so, in what time frame.

As a result of that analysis, both Jurisdictions determined that it was in their best financial interest to extend the term of the WDSA, by extending the site lease with Covanta from 2025 through 2038.  The site where the facility resides will return to the Jurisdictions in 2038, and the per ton fee which the Jurisdictions pay to Covanta for disposal of their waste will not increase from the rate paid in FY2014, and will drop to $0 during the period from 2025 to 2038, as per Section 2.3c of the WDSA.

For additional information, please contact the Department of Transportation & Environmental Services (T&ES) at
703.746.4103